In this betting preview, we look at the League Two fixture Scunthorpe vs Swindon. Who will make a winning start?

Scunthorpe vs Swindon: A trio of tips

Okay we kick off our tips for Scunthorpe vs Swindon with a bit of a surprise pick; we fancy Scunthorpe to win the game. Neither team had a season to write home about with their respective campaigns seeing them finish down the bottom of the table. The big difference we've seen during the summer is that one team have put together some good displays in pre-season whilst the other seems scarred from their last year. Scunthorpe have won three of five friendly matches with most fixtures being against stronger opposition.

Our next prediction is for there to be over 2.5 goals in the match. Three of the last five meetings between Scunthorpe and Swindon have gone over 2.5 goals; the average of those five matches is 3.6. Then you have the more recent form to consider. Scunthorpe have seen three of their last five games hit at least the three goal mark; in that time there has been a total of 14 goals. That's an average of 2.8. Swindon have only exceeded 2.5 on two occasions in the past five but with an average of 2.4 goals per game things certainly aren't a million miles away. All things considered, this bet has value.

We might think the match itself will see a fair few goals but Swindon will only be contributing a maximum of one; at least that is our prediction. The reason for this tip is simple. Firstly, Scunthorpe have conceded more than one goal just once in their last seven matches. Then there is Swindon's goal scoring form to consider; their last five matches have averaged one goal scored per match.

Scunthorpe vs Swindon: How are the teams shaping up?

Scunthorpe ended last season with just one win in 15 games; it was a woeful end to a miserable season for them. They do at least look like they'll have a few more wins to celebrate this campaign though; they've performed reasonably well in pre-season with wins over Burton and AFC Wimbledon particularly noteworthy. Harry Bunn is the main man to watch in this game.

Like their hosts, Swindon had an appalling campaign in 2020/21 albeit in a higher league. You only need to look at the promotion odds to realise just how poorly Swindon are shaping up. Their pre-season results, which have seen them win just one of five games. They had big defensive issues last season but they will have helped Akin Odimayo's development. His performance at the heart of the defence will have a big impact on this match.

A few final questions ahead of Scunthorpe vs Swindon 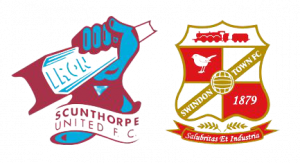 Where did the sides finish last season?

Swindon finished 23rd in League One. Scunthorpe ended up 22nd in League Two