In this betting preview, we look at the EFL Trophy tie between Shrewsbury vs Crewe. Who will get the win?

Our opening statement touched on the poor starts to the season both teams have made but Shrewsbury earned their first win of the season on Saturday; that result – and performance – feeds our prediction for them to beat Crewe. Crewe have lost five games on the spin whilst Shrewsbury had been on a four game losing streak until the weekend. In their match against Gillingham they fell behind early on but rallied to come out 2-1 winners. It showed a good spirit in the group and now morale will have received a welcome boost. Crewe meanwhile will be on a serious downer.

You can forget what the total goals have looked like for Shrewsbury and Crewe over the past few weeks; it means nothing because their contribution to the goal scoring has been as close to non-existent as it comes. Crewe have not scored in five matches whilst Shrewsbury have managed to net just two goals. Given such a pathetic goal return from both sides, the idea that this match serves up three goals is something we simply struggle to get on board with; the betting odds associated to an under 2.5 bet looks like good value too.

Our final prediction is that at least one team fails to score. Now, we've already offered up the tip that Shrewsbury win but, this bet could – and should – cover off a Crewe win or a goalless draw too. We shouldn't need to explain our logic if you've read our previous tip but we'll reiterate again; Shrewsbury have scored just two goals in their last five matches. That's an average of 0.4 goals per game. Remarkably, that makes them big scorers compared to Crewe; they've failed to score a single goal in their last five and have just six in their last 10.

Shrewsbury vs Crewe: Meet the teams

Shrewsbury's form has been terrible this season. They've played seven matches this season losing five, drawing one and winning the other. They'll take huge confidence from their win, which came in their last outing, and another positive result in this competition could be massive for momentum. If they're to win, they will need to find a way to score. Can teenage striker Tom Bloxham deliver again?

Like Shrewsbury, Crewe also have one victory this season. It came in an EFL Trophy match six games ago. Since then, they've lost five on the bounce conceding nine goals and scoring none; to make matters worse, they're not even averaging three shots on target a game across those five fixtures. Last year Mikael Mandron hit double figures for Crewe; they could do with him finding form.

Shrewsbury vs Crewe: What are the best odds?

Pre-match questions for Shrewsbury vs Crewe 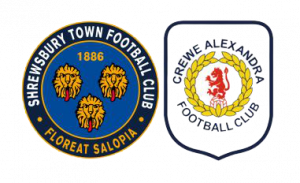