Spartak Trnava are the favourites to win this game, even though they already have a great advantage. Will they get the win they're expected to? Find out with our Newtown vs Spartak Trnava prediction.

If you need some help to decide what is the best bet for Newtown vs Spartak Trnava, check our top betting picks for this game:

After the first leg that ended with a convincing 4-1 win for Spartak Trnava, it's clear that the Slovakian team is already in the next stage, unless a true miracle happens in Wales in the second leg.

But we can't see that happening since Newtown is simply far from Spartak Trnava in quality. If anything, we can see the guests winning again to add something more to their UEFA coefficient.

Not many people expected Newtown to score in the first leg, but they at least managed to do that since they also conceded four goals. So, we wouldn't be surprised if both teams scored in the rematch as well.

After all, Newtown will now host the game and that should give them a bit of a boost to find the net once again, while Spartak Trnava will take even the slightest chance to score against the inferior opponent.

Since we expect both teams to score in this match and since we saw five goals in the first leg between Newtown and Spartak Trnava, we can see this game ending with three or more goals being scored.

Also, both teams have gone over 2.5 total goals in their last two games across the board and with the result already heavily in favour of the guests, we can see this being played more as a friendly game than an official one.

Newtown have been going through a rough patch in recent weeks; they won just one of their last six games, with three losses in that stretch. It's worth noting that Newtown eliminated Havnar Bóltfelag in the previous qualifying round; will Pætur Petersen do enough to give them the win in the second leg, even if that's not enough to overcome the big deficit from the first one?

Spartak Trnava have been a tough nut to crack; they suffered just one loss in their last nine games, with five wins and three draws. Spartak Trnava will fancy their chances against a struggling Newtown side on Thursday, especially since they already have a nice advantage from the first leg; all eyes will be on Milan Ristovski.

Top Betting Odds and Stats for Newtown vs Spartak Trnava

Check out the latest form, important stats and best betting odds for this match: 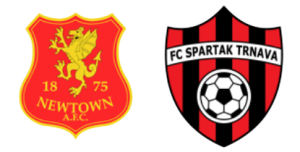 What time does the game kick off? The game kicks off at 6 PM BST on Thursday, July 28th.

Where is the match being played? The match is being played at Park Hall in Oswestry, Wales.