St Joseph's have done well to make it to this stage but the competition is heating up now. Can they find something special to beat Slavia Prague? Find out with our St Joseph's vs Slavia Prague prediction.

Although St Joseph's last two games did not feature plenty of goals, most of their games have been on the high-scoring side. As a matter of fact, five of St Joseph's last seven games went above the 2.5 goal margin. In like manner, Slavia Prague have had their fair share of high-scoring games; as nine of their last 13 games saw at least three goals scored. All things considered, we should expect some goals here.

St Joseph's have done fairly well lately; they've won three of their last five games, with a draw and a loss. St Joseph's will welcome Slavia Prague to the Victoria Stadium on Thursday; they'll call on Julian Valarino to guide them to victory.

Slavia Prague are coming off back-to-back wins; they've been a difficult team to beat, having lost just once in their last seven games. Slavia Prague have no losses in their last three games; they'll look to extend that run to four games, with some help from Ondrej Lingr. 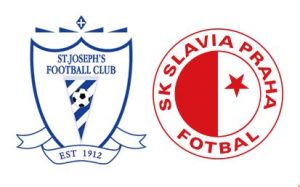 Where is the game being hosted? Victoria Stadium

Who are favourites to win? Slavia Prague