In this betting preview, we look at the Europa Conference League second leg between Vitesse vs Anderlecht. Who will make it through?

We kick off our predictions with a look who will win the match and our tip is backing the away side, Anderlecht. The first leg ended all square but it was the Belgian's who were left to rue missed chances having had the better of the match. There are a couple of other things that tip the scales in their favour too. Firstly, they are in better form having won four of their past five and, secondly, they've not had a match since the first leg giving them plenty of time to focus on Vitesse. Vitesse meanwhile hosted Willem II at the weekend and were turned over 3-0 meaning they've now won just two of their last five.

The next of our tips is backing both teams to score. Firstly, the first leg ended with both teams netting but, more than that, both teams have good form in the BTTS market. Vitesse have scored in eight of their last 10 games with both teams scoring in seven of them. Anderlecht have netted in nine of their past 10 with both teams bagging goals in seven. With such stats to back this bet up the odds have real value.

Our final tip follows a similar set of stats to the previous prediction and, again, the over 2.5 bet brings serious value with it. Of course, the starting point is the fact that Vitesse and Anderlecht shared six goals in the first leg. You've then got the fact that four of Vitesse's last five have seen at least three goals. Anderlecht can go one better than that though; each of their past five have all exceeded the 2.5 mark.

Vitesse vs Anderlecht: The teams

Vitesse have one won, drawn one and lost one of their past three games but they will be far from happy with how things are going. They were highly fortunate to leave the first leg all square and their display against Willem at the weekend was woeful. With six goals shipped in their last two games they could do with a big performance from Riechedly Bazoer. In an attacking sense, Nikolai Baden Frederiksen will be the man to shoulder the pressure.

Whilst Vitesse suffered a morale sapping defeat at the weekend, Anderlecht enjoyed a weekend off giving a couple of bonus days to prepare for this match. They might be the away side but they'll be uber confident of winning the game. It was only a late penalty miss that stopped them winning the match and their general form is good. As for the players to watch, Benito Raman bagged a brace in the first leg and Yari Verschaeren already has three goals and two assists to his name from seven games this season.

Vitesse vs Anderlecht: Betting odds and other key stats

FAQ on Vitesse vs Anderlecht 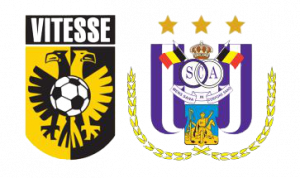