In this betting preview, we look at the A-League fixture between top-six outfits Adelaide United and Brisbane Roar at the Coopers Stadium on May 16. United are in fourth place while Roar are a point behind but have a game in hand in the sixth position.

Adelaide United were taken to the cleaners on this last outing on the pitch, succumbing to Melbourne City in a 4-1 thrashing. United have a tough task on their hands as the form team in away fixtures makes the trip to Coopers Stadium. Roar were involved in a gruelling fixture with Central Coast Mariners but managed to shut out the Mariners forward line. They will be expecting more of the same to add to their 10 points from the available 15 in away fixtures.

The hosts have seen three or more goals in just once in their last five home fixtures. They will be taking on Brisbane Roar on Sunday morning, the squad that boasts the second-fewest goals per match average. Warren Moon's men have shown a change in their approach in recent weeks, preferring to attack over defence. However, given the possibility of moving into second place, they will return to their roots with a cautious display against United.

In the last five fixtures at the Coopers Stadium, three have seen a clean sheet that includes two 0-0 draws. A similar trend is witnessed in Roar's last five outings across all competitions. They have kept three clean sheets, troubling the scorers on three occasions while also seeing two 0-0 stalemates. With both sides likely to cancel out each other in all departments, the scorers will not get much action.

The Reds have stuttered in their last five fixtures, failing to register a win while accumulating three draws against their names. With fellow outfits seeing a similar turn of events, they have managed to keep their top-six placement. However, they can move into second place with a positive result in this six-point affair. Not only can they arrest their decline but also deal a blow to their high-flying rivals. They will need their attackers to account for their presence after going into hibernation in recent weeks. After scoring in three successive fixtures, Tomi Juric has not troubled the scorers in four matches.

With a game in hand, Brisbane Roar have the opportunity to leapfrog their rivals and make their claim for the top two slots. Warren Moon has done an amicable job to turn around their season. Cheif to their rise in standings has been their away form, the third-best in the Australian top-flight football. This has been made possible by their scoring output. However, coming into this fixture, top scorer Dylan Wenzel-Halls has not hit the back of the net in six fixtures, with young Riku Danzaki made to pick up the slack. The Japanese midfielder has scored four goals in eight outings, bringing his tally to seven in twenty outings.

FAQs regarding Adelaide United vs Brisbane Roar Coverage and Accessibility 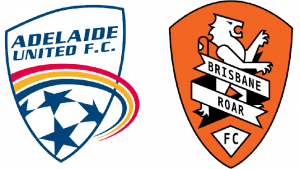 The match will take place at Coopers Stadium.