This preview looks into the Greek Super League meeting between AEK Athens and PAOK at the Olympiako Stadio Spyros Louis.

AEK Athens are keen on recovering from their back-to-back league defeats while PAOK are looking to stretch their unbeaten run to 7 matches in all competitions.

AEK Athens are keen to bounce back from the back-to-back losses that they have suffered at a crucial stage in the season. The result against Olympiakos has put the club at a disadvantage in the race for the second spot – compared to PAOK and Aris. PAOK are looking to strengthen their grip on the second place with a seventh consecutive unbeaten match in all competitions.

Despite PAOK being on a splendid run without any defeats in the last few games, the team has been unable to break down the opposition with ease. Pablo García’s team has scored only six goals in the last five games. AEK Athens, though, have struggled for clean sheets of late. It has been the trend even in home matches where Apollon Smirnis are the team to have last failed to score against AEK Athens.

PAOK have not found it difficult to manage at least a goal in away matches. In fact, the failure to score against Panathinaikos is the only blemish that PAOK have in the last nine away trips in all competitions. Manolo Jiménez’ team have every reason to be worried about their defensive record in this match.

AEK Athens are finding it difficult to pick themselves up after a couple of disappointing results – which culminated with the loss against Olympiakos in the last league encounter. Manolo Jiménez has seen his team struggle in away matches. Hence, this match taking place at the Olympiako Stadio Spyros Louis will be a welcome relief for the team. AEK Athens have lost three out of the last four trips in the league, while suffering just one defeat in the last five league matches at home.

PAOK are open up a lead over Aris and AEK Athens in the race for the second spot, which will provide the access to Champions League qualifiers. The substantial advantage on goal difference compared to Aris puts PAOK in a strong position for a second-place finish. Out of the top three teams chasing for the second spot, it is PAOK who have momentum with the recent set of results.

Top Betting Odds and Stats for AEK Athens vs PAOK

FAQs regarding AEK Athens vs PAOK Coverage and Accessibility 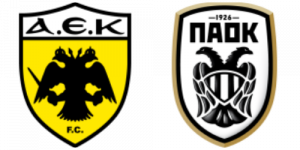 This match will take place at the Olympiako Stadio Spyros Louis in Athens.

PAOK are the favourites to this game courtesy of their better head-to-head record in recent seasons and overall form in the last few games.