Al Quwa Al Jawiya face Al Jazira in another match from the AFC Champions league that practically has no point at this point.

Al Quwa and Al Jazira do not have a chance to take over the top of this group due to their terrible goal difference and Al-Shabab need one more point to win it.

Al Quwa Al Jawiya had three out of four games in the group stage with over 2.5 goals. The first match between these two teams also ended with a 1:2 win of Al Quwa a couple of weeks ago. Since both teams can score goals and both teams have nothing to fight for at this point in the AFC Champions League, we think that we will see more goals than usual and perhaps even more than 3 this time.

These two teams are on the same level and we should see a competitive match with a close result like the first one. But since Al Quwa beat them on the road and they generally looked better, we think that the hosts have a much better chance to win. Al Quwa also got a draw against the best team in the group – Al Shabab, at home, so we know that they are strong hosts and will go out for the win even though there is no importance.

As mentioned above, both teams scored in the first match and we have no doubts that this will happen in the second one again. Al Quwa had both teams scoring in three of their four games in the group. On the other side, Al Jazira had BTTS in just a single game and that was the one against this opponent. Their defense usually is quite impressive and they can score goals but we also expect the same from their opponents.

Al Quwa Al Jawiya won the championship in Iraq in 2021 but this season, they will not even qualify for the AFC Champions league as the difference between them and the top two teams is too big. Their attack remains effective and their defense does not concede a lot of goals but there have been two stronger team in the league. After 25 rounds in the new season, Al Quwa's goal difference is 33:18, which is rather impressive.

Al Jazira's season has not gone in the way they hoped perhaps but they still have great chances to end in the AFC CL qualifying places. Their attack is even more effective than Al Quva's on average and their goal difference after 20 rounds in UAE is 35:22. Unfortunately, that was not enough for them to succeed in the Champions League and the team will have to wait for next year to try again. 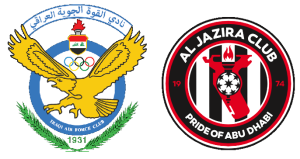 In which places are Al Quwa and Al Jazira in the AFC CL group?

Al Shabab went through all their opponents in the group, which is why most teams have terrible goal differences. Al Quwa and Al Jazira have the same number of points – 4 and are sitting in 2nd and 3rd place in the group.

This match has been scheduled for the King Fahd International Stadium in Riyadh.

This match has been scheduled for 17:15 UTC.