As the last round of the Europa Conference League approaches, the standings of Group A have more or less been settled already. We know that LASK or Maccabi Tel Aviv will finish first and second but we do not know which side will win the group. Maccabi Tel Aviv still have chances if they win with a big difference, so this match will be crucial for them.

Alashkert have had one of the most disappointing debuts in UEFA history. The team recorded 5 losses already and is likely to lose its last match again as this fixture is important for Maccabi Tel Aviv.

The teams played once at the start of the tournament and Maccabi Tel Aviv won at home with 4:1. We know that both sides cannot be compared in strength – Maccabi have a strong squad that can match most of the good European teams while Alashkert have never been in a UEFA league before. Maccabi were quite impressive overall and scored 13 goals in just 5 games here. Alashkert have nothing to fight for but respect, so we expect them to focus their efforts in attack as much as they can, which in turn will give Maccabi more chances to attack as well. We expect the visitors to score several goals like in the first match and this was not a one-time case, as Maccabi won 0:5 against HJK as well.

As you read the previous tip, it should be more than obvious that Maccabi Tel Aviv are the big favorites here and the odds are not the highest. The team has a chance to end up in 1st place in the group if they win with several goals difference. And we expect them to – Alashkert have no chances to match Maccabi if the visitors come with their traditional squad, which we expect them to do.

Maccabi need to win by at least 2 goals if they want to even have a chance to win the group after a negative result for LASK. That means, the team needs to destroy Alashkert's defense and this is exactly what is likely to happen. Nobody expects Alashkert to be able to hold after conceding 14 goals in 5 games. As the top-scoring team in the entire Europa Conference League, Maccabi Tel Aviv should be able to score at least 3 goals in such an important fixture as they cannot rely on luck anymore. LASK will also most likely win their match, so Maccabi needs a massive result in this fixture. 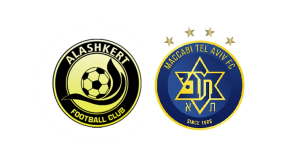 • Which players will miss the match for Alashkert?

Thursday's hosts have not listed any players as missing for the time being.

• Which players will miss the match for Maccabi Tel Aviv?

The visitors have also not listed any missing players but they have put midfielder Maor Kandil as questionable for the game, which most likely means that he will once again be sidelined.