Lecce took over the top of the Italian Seria B even with their disappointing performance against Benevento on Sunday. They played better but failed to secure the three points due to their own goal. Now, they face Alessandria and have a perfect chance to seal off their leadership.

Alessandria have one more chance to reach a position above the relegation zone due to SPAL's terrible form. Unfortunately, Lecce are the absolute most difficult opponent in the league and they will have to play their best match to date to succeed.

Here is an interesting fact – Alessandria are one of the weakest teams in the league and have resided in the bottom of the league since the start but they are also one of the highest-scoring teams in the league on the road. Unfortunately, this success has not translated into their home games. Lecce have one of the strongest defenses in the league although they have been making some mistakes lately that cost them both goals and points. We think that they will take this opportunity to win and secure their top position in the league.

It is quite surprising to see such low odds for a visitor in Seria B although we have teams from the opposite sides of the table. We do think that they are still worth a shot given the nature of the game and the high stakes. Alessandria have not been terrible at home this season but they lost several games lately. Lecce will be motivated after missing two points due to a stupid mistake in the previous round and we think that they will win 0:1 or 0:2.

Alessandria and Lecce are two teams that often take loads of corners and it never really matters if they are winning or losing. Their playing styles simply help them in this aspect of the game. Most of Alessandria's home games this season had over 9 corners total and they have been taking quite a few as well. Lecce often take 7-8+ corners in away games and they are one of the best teams for this type of bet. We think that there will be a lot of attacking football in this fixture with both teams creating chances, so we think that the line of 9 corners could be overcome even by Lecce alone.

Top Betting Odds and Stats for Alessandria vs Lecce

FAQs regarding Alessandria vs Lecce 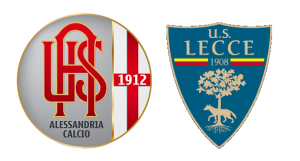 • In which places are Alessandria and Lecce?

As mentioned above, Lecce took over the top of the league which means that they are the current leaders. They lead by one point, so this fixture is crucial for them too. Alessandria are the ‘top team' in the relegation zone and they need just 1 point to get out. They are 16th with 22 points.

Lecce have the best goal difference in the league. They are the highest-scoring team with 36 goals in 22 matches and they also conceded only 19 goals. Alessandria's goal difference is negative but far from the worst – 24:33.