Let's check out the latest Alessandria vs SPAL betting tips for their upcoming game on the 2nd of April (Saturday). If you want to see more Serie B predictions, you will have to check out our website.

After going over the data for the Alessandria vs SPAL fixture, we came up with the following free betting tips for Saturday. We used odds from Betfred's platform. All odds are subject to change from NetBet, so see your bet slip or check out the wager on the bookmaker platform before placing any wagers.

SPAL seems to have a better form this season and although they are both in the 15th and 16th positions in the Serie B table, there is a seven-point difference between the two teams in SPAL's favor. Also, their recent form is better than Alessandria's form in the last five games with only two losses, while the home team lost three matches in a row out of their last five games.

Right now, Alessandria is in the worst shape of all Serie B teams because they have four injured players on their roster. That includes Aristidi Kolaj who is supposed to be back on April 15th. Gabriele Bellodi, Francesco Orlando, and Andrea Palazzi are also out with different injuries and are supposed to be back in late June or early July.

SPAL not only has better recent form and more points in the Serie B table, but they also don't have any injured or suspended players. The most likely outcome this weekend is a clean sheet win for SPAL, and even the bookmakers think so.

Head-to-Head Stats for the Alessandria vs SPAL Fixture

Below, you can see the most recent match histories and team form for the upcoming Alessandria vs SPAL fixture.

Commonly Asked Questions About the Fixture 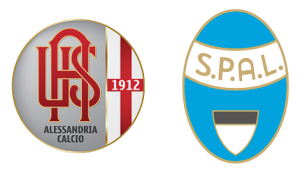