Sunday's Eerste Divisie program continues with a match between Almere City and Telstar – two teams that have no chances for anything this season.

Almere City have been among the weakest teams in the league since the start of this season – perhaps surprising for some who are used to seeing them perform better. Telstar have not been bad overall but their chances to reach a promotion have diminished with this 12-point gap between them and the last in line.

Matches between these two teams often end with loads of goals and in most cases – from both teams. We expect another similar result here. Almere City have to step up their game, obviously, but their offense has not been as bad as the standings make it look. The team scored 34 goals in 23 games and we expect them to score at least once against a team whose defense has been terrible. Even though there is a huge difference in the standings, Telstar have scored a lot fewer goals than Almere City. Yet, their recent games have been good and we are certain that we will see at least one or two goals from them.

Here is a strange thing – Almere City are the big favorite in this matchup according to the bookmakers. This is strange given that the hosts are the weakest team in the league and they have a lot of injured players currently. They have won just 2 of their 11 home games this season and we do not expect them to win the three points on Sunday. Telstar are far from incredible on the road but they are in much better form and the odds for this match seem like a great opportunity.

There is no way not to go for this market when the odds are so greatly placed. With Almere City as favorites, the odds for Telstar to score two goals are outstanding. We said that they are far from great offensively but Almere City have the weakest defense in the league – they conceded 53 goals in 23 games. Twenty-six of those goals were conceded in their 11 home games. We expect Telstar to win this match with 1:2 or 1:3.

Top Betting Odds and Stats for Almere City vs Telstar

FAQs regarding Almere City vs Telstar 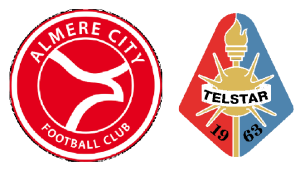 • In which places are Telstar and Almere City?

Due to Dordrecht's recent improvement, Almere City fell to the bottom of the table and their future does not look bright. Telstar, in turn, are right near the middle of the table with low chances to reach the promotion group – 12th with 26 points.

• Which players will miss the match for Almere City?

The hosts have listed five players as missing for this match, which makes it even stranger that they are the favorite. Forward Bradly Van Hoeven will miss the match along with forward Jeffry Puriel, defender Daniel Breedijk, midfielder Steve Tunga, and midfielder Anass Ahannach.

• Which players will miss the game for Telstar?

Telstar have not listed any missing players but there are three names that are “questionable”, which in most cases means that they will not play – midfielder Marouan el Ouardani, Vincent Regeling, and midfielder Anwar Bensabouh.