Anderlecht thrashed Laci 3-0 last week and now have the home advantage against the Albanians in Thursday's 2nd leg. Laci surely can't turn this deficit around and will be preparing for their European adventure to come to an end.

Anderlecht secured a win-to-nil in Albania and we're expecting the Belgians to claim another win and another clean sheet on Thursday. The hosts have kept clean sheets in their last two matches, while Laci have failed to score in three of their last five outings.

We saw three goals scored in the first leg and we're predicting that over 2.5 goals will be produced once again on Thursday. Three of Anderlecht's last four matches have produced over 2.5 goals and the same can be said for three of Laci's last six fixtures.

Anderlecht have won their last two matches 3-0 which includes the 1st leg against Laci in Albania last week, so you can see why we have backed the host to run out 3-0 winners once again. Laci failed to score against Anderlecht in the 1st leg and we can't see the visitors scoring in Belgium either.

Anderlecht have one foot in the next round

Goals from Delcroix, Hoedt and Refaelov helped Anderlecht secure a 3-0 win away at Laci last week and now the Belgian side have one foot in the next round of the Conference League. Anderlecht followed up the 1st leg win with another 3-0 victory against Seraing in the First Division A and look to be building up steam ahead of the official start of their European adventure this season.

Laci were always going to be the underdogs in this tie, even if they had managed to win or draw in their own backyard, but losing 3-0 has practically assured Anderlecht of their spot in the next round. Laci's only real hope of turning this tie around is an early sending-off for their hosts and a couple of first-half goals in their favour, both of which seem highly unlikely. Laci don't start the new Superliga season until next month and would have been hoping to extend their run in Europe for a little while longer to avoid the need for pre-season friendlies. 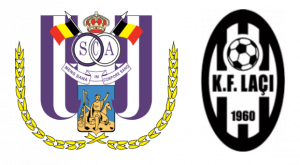 Where is the game being played? Lotto Park (Bruxelles, Belgium).