The second match on Sundays slate of Belgium Jupiler League fixtures sees Anderlecht take on Zulte Waregem, in a match up that sees 6th take on 16th. Anderlecht will see this as an ideal opportunity to move further up the table and closer to those at the top. For Waregem, they currently sit four points above the relegation zone and know that a win here, will help them move potentially further clearer.

As you would expect in a match up between two sides separated by 10 points, Anderlecht are the overwhelming favourites for this match, to the point that there isn’t much point in backing Anderlecht to win this game outright. However, Waregem have won more points on the road than at home, and their three recent defeats has only been by a margin of one goal. Anderlecht aren’t the worlds most prolific side when it comes to home form and have only won two of their last five at home, in trying to find some value, we like Waregem at the handicap with +2 goals and think that could be one of the better bets of the day.

Considering that there has been 19 goals when these sides have met over the last four games, we think the smart play has to be on both teams to find the back of the net and at odds of 5/6 we think that’s a generous bet considering both teams have scored in three of the last four meetings. Despite being heavy favourites, Anderlecht haven’t kept a clean sheet for their last 12 games, so despite Waregem being lower down the table then they would ideally like we do fancy them to find the back of the net here.

The Best Match Odds for Anderlecht vs Zulte Waregem 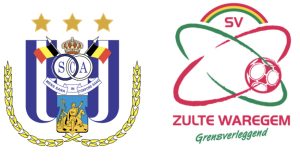 This game will be played at Lotto Park at the home of Anderlecht.

Waregem can boast the Belgian Leagues third highest scorer in Jelle Vossen who has netted ten times this season.

What is the kick-off time for Anderlecht