Two teams in the fight for the title meet in the 14th round of the Belgian Jupiler Pro League – Antwerp and Anderlecht. Whichever team wins will shorten the point lead between them and the leaders Royale Union SG.

The matches between Antwerp and Anderlecht in the past have been interesting but not always as goal-packed as we are used to seeing. This fixture promises to be thrilling as the stakes are high and both teams have been among the highest-scoring sides in the league.

The Jupiter Pro League is one of the leagues with the highest numbers of goals throughout absolutely every season. Antwerp and Anderlecht are among the highest-scoring teams in the league although this is particularly significant when Antwerp are away and Anderlecht at home. In each case, both teams to score option is the best you could pick in this match given the percentages for both teams this season – 69% for Antwerp and 77% for Anderlecht.

Besides goals, the Jupiter Pro League is the perfect competition for corner bets. Most teams take more than 5 corners per match on average and Antwerp and Anderlecht are exactly two of those teams. Their all-season averages are 5.31 for Antwerp and 5.69 for Anderlecht. Their recent performances are even better for our bet – 6.60 corners for Antwerp in their last 5 matches and 5.80 for Anderlecht.

Both teams are in fairly good shape although Antwerp recently lost their matches in the Europa League and the Belgian Cup. Soon enough, the team will likely have to focus only on the Belgian league. Almost 50% of Anderlecht's matches this season have ended at a draw while Antwerp have also had a fair share of similar results. Both teams are leveled in strength and given that Antwerp played a match during the week, we do not expect them to be in perfect shape for Sunday.

Top Betting Odds and Stats for Antwerp vs Anderlecht

FAQs regarding Antwerp vs Anderlecht 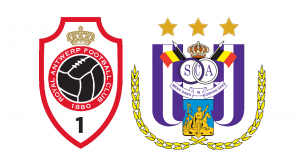 Sunday's hosts have listed three players as either missing or questionable, which means that they are likely to miss the match. These are defender Aurelio Buta, who has been in the team since 2017, forward Bruny Nsimba, and midfielder Sander Coopman.

• Which players will miss the match for Anderlecht?

• In which places are Antwerp and Anderlecht?

Both teams are in the promotion zone, which sends the teams to the European club tournaments. Antwerp are 3rd with 24 points while Anderlecht are 6th with 21.