Antwerp and Club Brugge are in the title fight once again and after 11 rounds, are divided by just 2 points at the top of the standings. Both teams play in European Tournaments this season and have a difficult schedule. Who will come on top and lead the league in Belgium?

Recent head-to-head games have gone both ways. Sometimes Antwerp snatches the win, sometimes Club Brugge, and sometimes the teams divide the points with a Draw.

Obviously, both teams have been playing almost perfectly in the first third of the season. Antwerp is a solid home team while Club Brugge is an impeccable away team. In those cases, the safest option for a Full Time Result is a Draw. Historically, a lot of matches at Antwerp have ended at a draw with Brugge but this is not something to consider. We simply see it as the most likely outcome given that the teams are absolutely leveled in strength and tired from a match in European tournaments mid-week. If either side wins, it will be with a goal difference but the chances are that we will win with this pick – a Draw.

Antwerp is one of the best choices when it comes to both teams to score bets. Not that Club Brugge is much different, but Antwerp has had this happen in 73% of their 11 matches this season and in 4 of the last 5. Both teams have been scoring goal after goal and conceding goal after goal. This is what we love about the Belgian Jupiler Pro League – one of the best leagues if you like betting on goals. We expect to see a goal-packed thrilling draw on Sunday, something of the sort of 2:2.

The corner lines in Belgium are higher than what you normally see for European leagues and it is not strange – Belgian sides play strong attacking football and take plenty of corners. Antwerp and Club Brugge are two of the best examples and on Sunday, they play against each other. We should see a fiesta with corners as both sides have some incredible averages this season – Antwerp has taken 5.27 corners per match on average while Club Brugge has taken an average of 7.91 which is absolutely phenomenal.

Top Betting Odds and Stats for Antwerp vs Club Brugge

FAQs regarding Antwerp vs Club Brugge 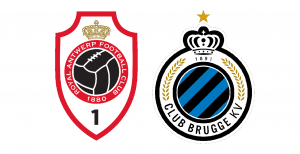 Club Brugge is fortunate not to have any missing players apart from youngster Ruben Providence, who joined the team from the youth formation of Roma this season but has not yet played due to an injury.

Sunday's fixture will be played at Antwerp's Bosuilstadium which was built in 1923 and has a capacity for 12,975 spectators.

• How many goals have Antwerp and Club Brugge scored and conceded in 11 matches?

Antwerp and Club Brugge are among the highest-scoring teams in the league after 11 rounds. In those matches, they have scored 21 and 20 goals. At the same time, they have conceded a considerable number too – 15 for Antwerp and 13 for Brugge.