Ascoli face Benevento in another playoff bout from the final games of Serie B.

Benevento look nothing like the team we saw throughout the season and their chances against Ascoli are lower than expected.

Normally, we would expect goals from both sides and it would be logical given that these are two of the best teams and they are fighting for promotion. However, Benevento's current form has been terrible and they won a single match in their last five fixtures in the regular season. Moreover, they failed to score a goal in three of their last five away games and Ascoli have one of the strongest defenses in the league.

There is little doubt about the favorite to win this match and it is Ascoli – the team lost only two games in its last ten and is on a streak of nine games without a defeat at home. They have been one of the strongest hosts in the entire league and we think that with Benevento's current form – have the better chance to win this playoff bout.

Although these two teams have been better than most and play attacking football, they do not take a lot of corners in general. Moreover, we have a lot of head-to-head games and most of them never had more than 10 corners. We expect a difficult game with fewer chances than usual and fewer corners than expected.

Ascoli were a contender since the start of the campaign and while they had their issues throughout the season and lost 11 games total, they managed to find the right form at the right time. The team has been incredible lately and seems like one of those with the highest chances to get promoted. They are a relatively low-scoring team compared to most others in the playoffs but we still expect them to get through Benevento.

Benevento were one of the title contenders until about a couple of weeks before the end of the season. They were at the top of the table and had great chances but then lost four out of their last five games. They are actually the best team when it comes to goals – the team scored 62 times in 38 fixtures this season. Yet, their current form is quite bad.

Top Betting Odds and Stats for Ascoli vs Benevento

FAQs regarding Ascoli vs Benevento 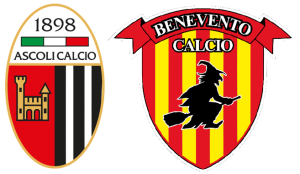 In which places did Ascoli and Benevento end the season?

Both sides have been in the playoff zone since the start of the campaign and finished in top 8. Benevento finished at 7th place with 63 points while Ascoli are 6th with 65 points.