Perhaps unsurprisingly, Ascoli lost terribly to Lecce over the week but their chances for promotion remain – they simply need to win against Frosinone, who are another direct opponent in the promotion race.

Frosinone bounced back from that surprising loss last weekend and returned to the promotion zone. Will they continue with another good result against the difficult Ascoli?

As a start, we should mention that Ascoli and Frosinone have a lot of history between each other and most of the games had few goals. For example, seven of the last nine h2h games had less than 2.5 goals.. Nevertheless, both teams have been having quite a few games with over 2.5 goals in recent weeks and we think that we will see at least two or three as a start in this fixture. In each case, we expect to see goals from both sides. Five of the last six games of Frosinone ended with more than 2.5 goals and the teams' away games almost always have both teams scoring goals. Ascoli are bad hosts and they concede a lot, so we expect that Frosinone will not find it too difficult to score.

Ascoli and Frosinone have not had draws in a while and it is surprising given the typical results of this league. Moreover, Frosinone are one of the teams with the most draws this season. Overall, both teams are in fairly good shape apart from their recent losses and we think that both have an equal chance to win. Ascoli are not great hosts while Frosinone are not too good on the road. Most of Ascoli's good results at home this season came against teams from the bottom of the table while all their matches against teams from the upper half were either ties or losses.

Frosinone are one of the teams that have taken the most corners this season and this refers to both home and away games. Overall, the team has taken an average of 6.52 corners per game this season. On the road, in particular, they toon 6.31 corners per game, so you can see that the over 4.5 line is not high at all. You can also opt for a traditional line of over 8 or 9 corners overall in the game but we believe that there is a better chance to see Frosinone with a good number. Still, here are Ascoli's stats too – 4.30 corners per game on average throughout the season and just 3.62 corners per home game.

Top Betting Odds and Stats for Ascoli vs Frosinone

FAQs regarding Ascoli vs Frosinone 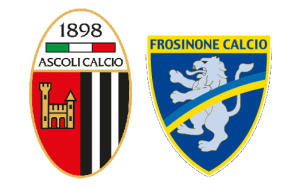 • In which places are Ascoli and Frosinone?

Ascoli and Frosinone are next to each other in the standings and have been passing each other back and forth for weeks. Currently, the hosts are 9th with 42 points, which is right below the promotion zone. Frosinone, in turn, are 7th with 44 points. The winner here will finish this round above its opponent.