Atletic Escaldes will face Gzira in the second leg of their Europa Conference League Qualifiers on Thursday.

The two teams reached a draw in the opening leg and left everything to be decided in this second fixture. Here are our predictions for this match.

The first match between these two teams ended in a 1:1 draw. We expect a similar result in this match or at least a goal from both sides without issues. These two teams are on about the same level from two small leagues and both will have their chances to grab the three points. Gzira were the weaker team in the first match but we still expect them to put some effort into scoring and to succeed.

As mentioned, these teams are quite equal in strength but we think that Atletic Escaldes will qualify for the next round. The first match wasn't supposed to end in a draw but Gzira were quite lucky. Atletic played a strong fixture and dominated for the better part of the 90 minutes. Now when they are the hosts, we expect even better performance and we think that they will score more goals than their opponents.

As mentioned, the first game between these teams ended in a 1:1 draw. We expect goals from both sides but we think that Atletic Escaldes will be able to score two or more by themselves too. They are the team that showed the better form and chemistry and they had a bunch of chances that were missed, unfortunately. Their matches have loads of goals in most cases, on the domestic stage.

There isn't much to be said about the football league of Andorra – this is one of the smallest leagues in Europe and perhaps in the world. Atletic Club Escaldes are not a massive team but they have been strong for that low level of football. The team has no experience in qualifications and probably have no expectations. We think that their maximum will be the next stage of the qualifiers.

Gzira are a team from Malta and the much bigger team out of the two here. Yet, they showed nothing in the first match and it seems that their form is quite bad right now. The team has always been one of the best in Malta and the league there is times bigger than that in Andorra. This means that Gzira should be the more experienced and better-prepared team. The squad is actually valued at more than 4 million euros right now. 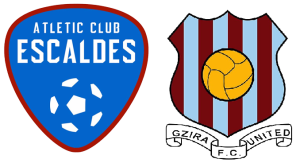 Although Gzira are the bigger team, Atletic Escaldes are a slight favorite according to the bookmakers.

This fixture has been scheduled for a stadium called Estadi Nacional, located in Andorra la Vella.