Atletico Madrid and Chelsea are facing each other in the Champions League Round of 16, which is their 8th head to head encounter. So, we’ve decided to bring you some free betting tips and predictions, the best odds, and offer some insight on both teams.

Note: Odds are subject to change, so the odds displayed here may not stay the same later on. Please check the odds carefully at the time of betting.

Our recommended Champions League bookmaker for this matchday is William Hill.

Atletico Madrid is doing great this season and is currently leading at the top of the table in La Liga. However, they’ve been a bit shaky as of late, having won only one of their last four matches. A revitalized Chelsea under the command of newly appointed manager Thomas Tuchel will be a tough test for them. And they are also missing a few key players due to injuries, such as Carrasco at the wings and Herrera in Midfield.

Chelsea was struggling under former manager Lampard, but they have held themselves together much better under Tuchel, who also lead PSG to the UCL finals last season. Tuchel has managed seven matches since taking over at Chelsea, of which five have resulted in wins and two draws. So Chelsea is going into the game with good form, fresh management, and a strong mentality. 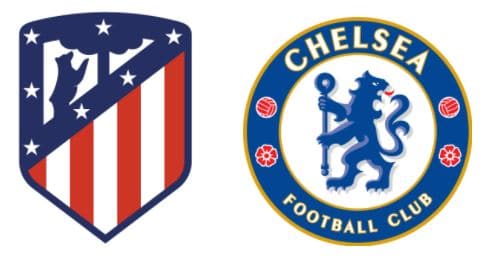 It’s hard to predict a win for either team, but betting on a draw is favorable for many reasons. Simeone is a mastermind at defensive tactics, so they will not make it easy for Chelsea to score. And with Luis Suarez at the front, they will be dangerous with counter-attacks as well.

But Chelsea players have significantly improved their tackling and pressing under Tuchel, so we expect them to put up a formidable display. With both teams playing on neutral ground, the match may likely end in an even clash.

Luis Suarez has appeared in 4 UCL matches so far and is yet to score a goal. However, in the league, he has scored 16 goals in 20 matches, so the striker is definitely on target. An experienced striker like him can definitely find the back of the net in 90 minutes against a Chelsea side whose defenses are not exactly the best. The odds for Luis Suarez to score anytime during the match are a bet worth trying.

When Will The Atletico Madrid Vs. Chelsea UCL Match Be Played?

The Champions League match between Atletico Madrid and Chelsea is on 23rd February 2021, at 8pm GST.

Where Will The Match Be Played?

The two teams will be facing each other on neutral grounds as the match will be played in National Arena, Bucharest, Romania.

Which Team Is The Favorite To Win The Match?

Neither Atletico Madrid nor Chelsea are clear favorites, and even the odds for their wins are set very close, so the match can go in any direction.

Where Can I Watch The Match?

You can watch the match at your betting site’s live-stream service. If you plan to create a new sports betting account, make sure to choose a betting site that offers live streaming.

Where To Bet On Atletico Madrid Vs. Chelsea UCL Match?

Our research shows that Bet365 and Unibet are among the betting sites with the best odds for Atletico Madrid vs. Chelsea UCL match.