Avispa Fukuoka will host Cezero Osaka in an important match from the late fixtures on Sunday.

Cezer Osaka are looking much better than the previous season and could become a real contender for the AFC Champions League next season if they continue with the above-average performances.

We do not see how this match could go with more than two goals given that Avispa Fukuoka are the team that has had the fewest goals in their games this season. They have had just 10 goals in their opening eight fixtures, which makes for 1.3 goals per game on average. They have actually had just 3 goals in their 4 home games to date too. While Cezero Osaka are one of the highest-scoring teams in the league, we do not expect them to score a lot here either.

Cezer Osaka have been quite surprisingly incredible on the road this season to date. After six games played in the league and cup, they are yet to lose a match on the road and won five in a row before this match here. We think that they are the much better team out of these two and while the draw is possible, we think that there is a good chance for an away win here.

We have two teams that are among those that take the fewest corners out of the entire league on average. For example, we have Avispa Fukuoka who have taken an average of 3.80 corners in their last five games in the league. On the other side, Cezero Osaka have taken even fewer – 3.60 corners on average.

Avispa Fukuoka had a surprisingly good season last year and finished in the top 8 teams and much higher than Cezero Osaka. This season will be different, however, as the team has already shown real struggles in absolutely all games to date. They need to improve their attack somehow but it seems unlikely for now. One positive thing is that their defense does not concede a lot of goals.

Cezero Osaka made some serious improvements in their team even without spending a single dollar. They sold multiple old players and replaced them with young talents from free transfers. It has obviously had a serious impact as they have been performing much better than we got used to seeing them in previous seasons. 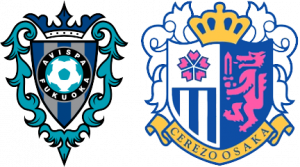 In which places are Avispa Fukuoka and Cezero Osaka right now?

After eight rounds, Avispa and Cezero are on the opposite ends of the league table. The hosts have been struggling and have a single win to date and are 14th with 7 points. On the other side, Cezero Osaka are 6th right now with 12 points.

This match has been scheduled for Avispa's home ground – the Best Denki Stadium.