While Avispa Fukuoka is second-last on the J-League table, they can still mount a strong challenge to avoid getting relegated. A win in this game should be enough to earn the hosts a spot above the red zone. However, with no league victory in 8 games, the question is can they get the three points against S-Pulse? Our best free Avispa Fukuoka vs Shimizu S-Pulse predictions are:

Shimizu S-Pulse to open the scoring

Avispa needs points to survive the cut. So, even with a poor form, they have done quite well in scoring goals at home games. They scored in four of their last five home games. Most importantly, Avispa found the target in all the two previous home meetings with Shimizu.

Lastly, over 2.5 goals is a good market to bet on. The clash is likely to yield at least 3 goals at full-time. All the last three meetings had a high scoreline and only two of six previous meetings had fewer goals.

Avispa Fukuoka is currently in the 17th spot or the second-last position on the J-League table. However, they tie at 16 points with Vissel Kobe in 16th place (relegation playoffs). The hosts have a chance to move further up the table. However, with no win against Shimizu S-Pulse in previous meetings, Avispa could find it hard to come off their shambles. These teams have had 6 encounters, four of which were won by Shimizu while the other two ended in a stalemate.

Shimizu S-Pulse has never lost a match to Avispa Fukuoka. They have scored at least twice in four of the previous 6 meetings with Avispa. Most importantly, Shimizu scored at least a goal against the hosts in all the previous duels while Avispa couldn’t do that in two games. The visitors have a better form than Avispa ahead of this clash, especially in the last five games. They lost only once and have two clean sheets in the last five matches.

Find out more details about this fixture in the tables below, including H2H and the highest Avispa Fukuoka vs Shimizu S-Pulse odds. 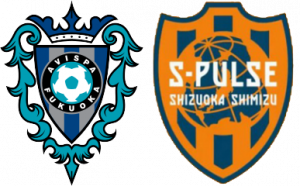 Where will the Avispa Fukuoka vs Shimizu S-Pulse match take place?

What time will Avispa Fukuoka vs Shimizu S-Pulse match begin?

Which is our favourite side to win the game?

We expect a narrow victory in favour of the visitors.