Avispa Fukuoka face Urawa Reds in another match from the 16th round in the Japanese J1 League.

These are two teams that have not been performing at their best level this season and already need all the points they can get.

These are two of the teams in the league that have the fewest games with over 2.5 goals in the season and most of their latest matches had 1-2 max. For example, only a single match of Avispa's last 5 had more than 1 goal total. On the other side, Urawa Reds had a single match with over 2.5 in their last five. We expect a competitive fixture without many goals.

Neither of these teams has been performing well this season and we think that they are completely equal in terms of their chances to win this. We expect to see another draw from them. Urawa Reds have had a total of 8 draws in thbeir 15 games to date – more than 50% of their matches. On the other side, Avispa also had 6 draws, 5 of which in front of their own crowd.

Avispa Fukuoka are performing worse than last season – in the previous campaign, they finished in the Top 8 at 8th place and even had a positive goal difference. This season has been worse mainly due to their huge number of draws. The team definitely is not bad and their defense is surprisingly good at home – they only allowed 3 goals in their first 8 home games to date.

Urawa Reds had a terrible start to the season after finishing 6th last season and winning the Japanese Cup, which sent them to the AFC Champions League. While they performed well on the international scene, their results in the domestic league have been absolutely terrible and the team is in danger of relegation at this point. 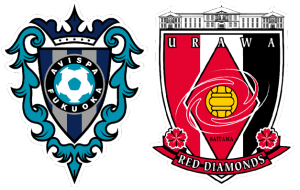 In which places are Avispa and Urawa right now?

After 15 rounds, Avispa Fukuoka and Urawa Reds are close to each other. The hosts are now 11th with 18 points while Urawa Reds are all the way down at 15th with 14 points.

This fixture has been scheduled for Avispa's home ground – Best Denki Stadium.

This fixture has been scheduled for 9:00 UTC.