Vojvodina looks to get their winning form when they travel to Backa Topola in the concluding game of the Swiss Super League. The hosts also dropped three points in the previous game, playing away from home.

Backa Topola has been inconsistent in the recent attempts and registered only one victory in the last five games, together with one draw and three defeats. But Vojvodina are even worse, having lost all of the previous six outings. Backa Topola will also be confident over the home advantage where they got three victories in the last five home games. Adding more, the hosts also won four of the last five H2Hs against the upcoming rivals. So we predict Backa Topola to continue the recent trend and add three points in this meeting.

None of the last three H2H meetings displayed a high-scoring total and gave a total of only three goals in that course. Backa Topola has managed an average of one goal per game in the last four attempts but Vojvodina has been terrible in this regard, scoring only two in the same duration. Tulips have also remained goalless in the last three H2H. Given this, we don’t see this game crossing the total of 2.5 goals.

Backa Topola held a strong defence in the recent H2Hs against Vojvodina and collected four clean sheets in the last five meetings. On the scoring scale, the hosts have missed the chance to score only once in the previous five home games. In opposition, the White-Reds failed to get on the score sheet in three of the last five attempts. Therefore, we don’t expect a difference from the recent H2Hs and predict only Backa Topola on the scoring side at the end.

Backa Topola got the fourth away defeat of the last five away outings in the last game against Radnicki Nis, losing by 2-0. The team has managed a total of 13 wins and nine draws in the season and stands in the sixth position on the table.  Dino Dolmagic will not be able to give his services in this game due to a knee injury.

The White-Reds got hammered at home in the last game against Cukaricki with a 0-3 defeat. Vojvodina has won only one game in the championship round and currently, finds themselves seventh on the points table. There is no fitness concern in the team but Stefan Djordjevic will not be available for this duel through being suspended.

Top Betting Odds and Stats for Backa Topola vs Vojvodina

FAQs regarding Backa Topola vs Vojvodina Coverage and Accessibility 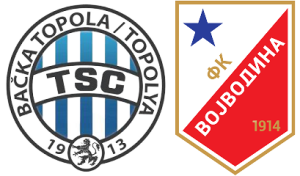 Where is the game being televised? Arena Sport (Ser).

Who won the last Head to Head fixture? Backa Topola won with a 0-1 scoreline.