Ballkani will face Klaksvik in one of the fixtures that do not attract a lot of attention in the Europa Conference League.

We have two of the weakest remaining teams facing each other in a match that might be a lot more interesting than expected. Here are our predictions.

Klaksvik had a surprisingly good match against Bodo/Glimt in the Champions League although they lost in the end. In the next round, they played against a weaker team – Sutjeska, and had two games with under 2.5 goals. Ballkani destroyed La Florita but Klaksvik will be a bigger challenge and we do not expect the same number of goals – they scored 10 in two games in the previous round. We think this will be a difficult match for both sides and we expect an under.

Both teams perform in two of the weakest leagues in Europe but it is normal that Ballkani are the favorite here. Klaksvik managed to reach a draw and then a win against Sutjeska but we think that they are not a great team overall and they struggle on the road. Ballkani are not significantly stronger but still the champions of Kosovo and they should be motivated for this game.

Neither of these two teams take a lot of corners and we saw it on multiple occasions over the past few weeks. Ballkani had just 10 corners in both games combined in the previous round, against a much weaker opponent than Klaksvik. On the other end, the visitors barely took 6 corners in their two games against Sutjeska. We expect a lot of defensive football from the visitors and less chances in this match overall.

The league in Kosovo is obviously young and there aren't any huge teams there but Ballkani have been the best teams for a while. They won the championship last year after losing just 6 games in 35 rounds. Their goal difference was 58:26. They have a great opportunity in this match to get closer to the Europa Conference League against easily one of the three weakest teams that remain.

If you take a closer look at the league of the Faroe Islands, you will see that Klaksvik are levels above all other teams there. The team won the championship with 10+ points last season and they are already almost the champions of the new campaign too. Their stats are unbelievable – 99:12 in 27 games last season and 45:4 in 16 games this season.

Top Betting Odds and Stats for Ballkani vs KÍ

FAQs regarding Ballkani vs KÍ 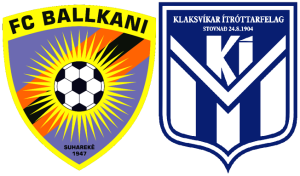