Barnet will face Woking in another one of the fixtures from the 4th round in the National League on Saturday.

Barnet and Woking have surprisingly been two of the three best teams since the start of the season and this game promises to be incredible. Here are our predictions.

After three rounds, we saw some incredible performances by Woking and Barnet and we expect a thrilling match with multiple goals from both sides. Barnet had two overs out of three games to date while curiously, Woking had three games that ended with the same result – 2:0. In each case, both teams are now fighting for the top of the league and will be motivated to win it. We expect to see at least one goal from both sides and possibly more than one from either.

Both teams grabbed two wins since the start of the campaign and have generally been impressive in attack. Barnet are one of two teams in the league that still have not lost a single match and we do not expect it to happen this round either. We think that they will win the game but since we have some high odds, we get the opportunity to play safe and bet on the draw no bet option. This means that if Barnet win, we get our full win and if the match is a draw, we get our innitial stake returned.

Woking have not yet had a single game with both teams scoring goals which is interesting. This will change in this upcoming match because we have two of the teams in the best current form that already showed us their goal-scoring abilities. Barnet have an incredible attack but their defense concedes quite a lot. Woking scored 4 goals in their first three games and their defense seems to be even better than Barnet's, and yet, they are the visitors.

Barnet were one of the weakest teams in the previous season and we definitely did not expect such a performance from them at the start of the new campaign. The team had a solid attack but also the second-weakest defense in the entire league. While they still have problems defensively, their attack has improved a lot and we now see their true potential. Perhaps they will not be a top contender throughout the entire season but we definitely expect them to fight for the playoffs.

Woking were slightly better than Barnet last season and mostly when it comes to the defense. The team conceded 61 goals, which is 28 less than Barnet in 44 games. It seems that they have also improved a lot, especially in defense, and will be fighting for that playoff position at the end of the competition. It mainly depends on the richer and stronger squads – when will the true contenders return to their usual form?

Top Betting Odds and Stats for Barnet vs Woking

FAQs regarding Barnet vs Woking 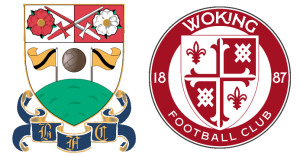 Barnet and Woking are near the top of the table – Woking are currently 3rd with 6 points while Barnet are 1st with 7 points.

This fixture has been scheduled for Barnet's home ground – The Hive Stadium.