The New Year kicks off for Barrow and Bradford City with a league match at the Dunes Hotel Stadium. This preview will cover all the top tips for this game.

Barrow failures in the final third were once again prominent as the team dropped points in the goalless draw with Oldham at home. Bradford produced a spirited performance to get a 2-2 draw with Sutton United. Bradford fell twice in the game and they played with 10 men for almost an hour.

Bradford have been struggling in front of goal with the team failing to score in three out of the last five matches. Even at home, Barrow have failed to score in two out of the last three games. The latest meeting between these two clubs was a stalemate. Bradford might be showing a lot of resilience, but they are winless in seven league matches. Incredibly, six of those games have been a draw.

There have been over 2.5 goals in just one of the last six league matches at home for Barrow, who have struggled to convert many chances that come their way. Even though Bradford will provide a little solace in this regard after scoring in four consecutive away games, this is not a fixture which can be an entertainer. In the three meetings between the two clubs, only one match has produced over 2.5.

There have been goals at both ends in the last two meetings between Bradford and Barrow. However, it would be difficult to see a repeat of the same with Barrow struggling in the final third of the pitch. Despite creating chances, Barrow have not been putting the ball in the back of the net.

Barrow remain in a position where they flirt with the relegation zone. The final game of 2021 did not provide any joy for Barrow, who are just four points away from the drop zone. George Williams and Jamie Devitt are the players unavailable for Mark Cooper.

Bradford have been on the verge of stepping into the top half of the table for several weeks. Manager Derek Adams will be relatively pleased with the spiritual way his players in recent games, but the lack of wins is starting to hurt the team. One positive for Adams will be the availability of a fully fit squad. The manager will be especially delighted with the manner of their performance against Sutton United in difficult circumstances.

Top Betting Odds and Stats for Barrow vs Bradford

FAQs on Barrow vs Bradford game 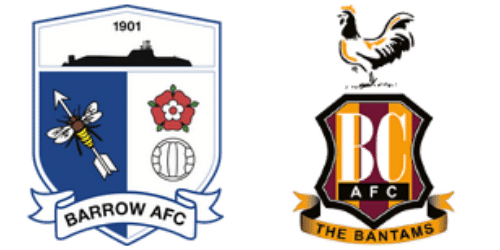 The Dunes Hotel Stadium will be the place for this league match.

Barrow are the team regarded as the favourites to win this match by bookmakers.