Barrow meet recently relegated Bristol Rovers in a League Two tussle in Cumbria on Saturday. Read our free predictions and find the top odds for the clash below in our detailed match preview.

Bristol Rovers have lost three of their last four matches ahead of Saturday’s fixture against Barrow. Read our top three predictions for this weekend’s League Two fixture below.

Barrow were torn to shreds at home by Aston Villa in the Carabao Cup on Tuesday, though The Bluebirds were unbeaten in three games at The Dunes Hotel Stadium before that – a run that included an impressive win over Hartlepool and a draw against a strong Exeter outfit. Bristol Rovers meanwhile, have lost three of their first four matches since their drop down the divisions and with their confidence shot, they are worth opposing again on Saturday.

Bristol Rovers were beaten in each of their first two League Two away assignments this term, though the Pirates did manage to plunder a consolation goal in each fixture. Barrow have looked ropy in defence at times this term and their return of just two clean sheets from their first six matches suggests Rovers can impact the scoresheet again. We recommend backing both teams to score in Cumbria with that in mind.

For our final tip, we switch to the corners market where we’re backing under 10 to be won by both teams combined. Both Barrow and Bristol Rover rank near the foot of the League Two table when it comes to corners being awarded in their fixtures. The teams’ games have averaged just 7.5 corners per 90 minutes so far– a trend we expect to continue when the set-piece shy duo face off.

Barrow flirted with the drop last season and eventually finished 21st out of 24 teams in League Two. The summer appointment of former Forest Green boss Mark Cooper was made in an attempt to avoid a repeat performance in 2021/22 and some of the early signs have been promising. The Bluebirds were spectacularly shot down in midweek by a young Aston Villa side, though little stock should be taken from Barrow’s early Carabao Cup exit.

Bristol Rovers spectacular fall from grace last season saw them relegated to League Two and though the Pirates were expected to find the going easier in the fourth tier, they seem to be falling below expectations again. Rovers were trounced 4-1 at Exeter last weekend and their performance would have set alarm bells ringing in the boardroom where manager Joey Barton was already an unpopular figure.

Top Betting Odds and Stats for Barrow vs Bristol Rovers 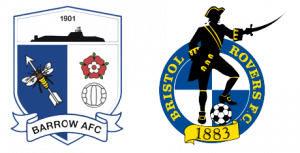 Saturday’s game will be played at The Dunes Hotel Stadium.

Who is favourite to win Saturday’s game?

The bookmakers have priced Barrow as slight favourites to win this weekend.