Barrow and Colchester meet at The Dunes Hotel Stadium in England’s League Two on Friday. Read our free predictions and find the best odds for the fixture below in our match preview.

Barrow could climb into the top three with a victory over Colchester on Friday evening. Read our top three predictions for this week’s fixture below.

Barrow have made a solid start to the 2021/22 campaign, pocketing eight points from their first six matches. The Bluebirds have been flying at home where they remain unbeaten, though Colchester have yet to taste defeat on the road. The teams drew both of their league encounters last term, and we’re tipping these well-matched outfits to share the spoils again on Friday.

Both of Barrow and Colchester’s skirmishes last season produced goals at both ends and the same market holds plenty of appeal for their latest tussle on Friday. BTTS has landed in two of Barrow’s first three home matches of the fresh campaign, while each of Colchester’s last two games on their travels also delivered goals at either end. We expect that pattern to continue later this week.

Colchester haven’t exactly been prolific this season, however, the U’s have looked solid defensively and they have conceded just four goals in 450 minutes of league action since the summer. Their strength at the back makes them an interesting prospect in the +1 handicap market this week, and a bet of that type would have landed in four of their five League Two assignments to date. We recommend sticking to the same market for Friday’s contest.

Barrow snapped a four-match winless run with their superb 3-0 win at Oldham last week – a result that catapulted them into the top half of the table after half a dozen games. New boss Mark Cooper hasn’t had the rub of the green in the cups, though Barrow have been performing solidly in the league, where they have won two, drawn two and lost only twice in six fixtures. The Bluebirds still haven’t had their wings clipped at The Dunes Hotel Stadium.

Colchester have started tentatively this season, though they remain a tough team to topple. Three of their first five matches of the new campaign have finished all square and the U’s have yet to lose a single game on the road. Hayden Mullins will hope to have defenders Tom Eastman and Ryan Clampin back in contention to make Friday’s match squad.

Top Betting Odds and Stats for Barrow vs Colchester 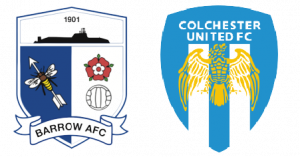 Friday’s game will be played at The Dunes Hotel Stadium.

Barrow and Colchester drew 1-1 when they last locked horns on April 5.