Barrow and Crawley go head-to-head in England’s League Two this weekend. Read our free predictions and find the latest odds for the fixture below in our detailed match preview.

Crawley have lost four games in a row ahead of their trip to play Barrow at The Dunes Hotel Stadium. Read our top three predictions for this weekend’s fixture below.

Just two points separate Barrow from Crawley in the League Two standings and though their current positions in the table suggest the sides are well-matched, we’re tipping the hosts to prevail at The Dunes Sands Stadium. Crawley are in the midst of a dismal five-match losing streak in all competitions, with four of their defeats suffered in League Two. Barrow meanwhile, have lost just once in their last six assignments and their superior form should make all the difference this weekend.

Bettors on the lookout for both teams to score opportunities this weekend would be wise to consider Barrow’s clash with Crawley. Eight of Barrow’s last ten fixtures in League Two produced action at both ends, while BTTS also landed in six of Town’s last eight contests in the division. Clean sheets are proving tough to secure for both outfits, so stick to the same market on Saturday.

Remarkably, Barrow are the only club in League Two that hasn’t managed to secure a first half advantage in a home game this term. The Bluebirds have consistently been slow starters on their own patch this term and when you consider that Crawley have gone into the break ahead just once in eight away tussles this season, it makes sense to back a draw in the half time result markets this week.

Barrow could be without utility man Tom Beadling, attacking midfielder Jamie Devitt, midfield stalwart Mike Jones and defender Kgosi Ntlhe this weekend. Worryingly, young striker Dimitri Sea is still unaccounted for. The Bluebirds were held to a 0-0 draw at Carlisle last week, though successive cup victories over Banbury United and Leicester City U21 before that has raised spirits in their camp.

Crawley’s game at Swindon last weekend was postponed due to a number of international callups from the Robins’ squad, meaning the Reds will have enjoyed plenty of rest before their clash with Barrow on Saturday. Town will need all the energy they can muster to stop a five-game losing run however, and another poor result could see them drop to within a point of the bottom three.

Top Betting Odds and Stats for Barrow vs Crawley 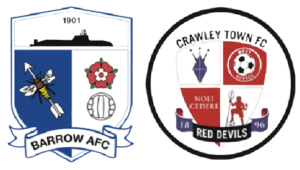 Barrow have been priced as favourites to beat Crawley this weekend.

Barrow vs Crawley is not being shown live on TV in the UK.