In this final round of the 2020/21 Bundesliga season, we look at the meeting between Bayern Munich and Augsburg at the Allianz Arena on May 22. Bayern Munich are comfortable at the top of the points table, while FC Augsburg will finish the campaign in midtable obscurity.

The Bavarians wrapped up their ninth-successive Bundesliga title and have nothing but pride to play for in the final fixture of the season. Meanwhile, FC Augsburg makes the trip to the Allianz Arena to keep hold of 12th place on the points table. History is against the visitors, who are winless against Bayern Munich in twelve H2H meetings. It should be a routine win for the champions, who will put the pedal to the mettle from the get-go.

Only seven out of the 33 Bundesliga fixtures Bayern Munich have been involved in have seen less than three goals. Their statistic for four goals and more matches stands at 20. With the Bavarians looking to end the season on a high note after disappointments in the Champions League and DFB Pokal, expect them to take the match to their rivals. They have averaged 4.9 goals per match at home and should be able to comfortably realize this at the expense of their rivals.

While Bayern continues to score freely under Hansi Flick, Augsburg have found goals difficult to come by. However, they have stood toe-to-toe with the Bavarians in their H2H meetings. Despite failing to take home the three points on offer, Augsburg managed to score six goals against their much-fancied rivals. Daniel Caligiuri scored in Augsburg's 1-0 win over Werder Bremen, while Andre Hahn remains a threat from his midfield position.

The same tale continues to be repeated in German top-flight football. Another year, another title triumph for Bayern Munich. However, this year remains the toughest in their recent history, taking home the plaudits after a late slip from RB Leipzig. There is a dire need for rebuilding at the club, especially as they lose Jerome Boateng and David Alaba. While those games will be played behind closed doors, the Bavarians will be gunning to go against Augsburg especially with the European Championships right around the corner. For the fans, Robert Lewandowski will be coming on the pitch to enhance his tally of 40 goals and seven assists.

The start of season expectations at Augsburg could not be more different from the Bayern Munich. The Fuggerstädters had the sole objective of ensuring continuation in the Bundesliga, a goal they achieved with room to spare. Markus Weinzierl's men have impressed in pockets of the season but suffered from their forwards failing to regularly trouble the scorers. It left their midfield to pick up the slack, a job they executed amicably. The club's top goalscorers list reads Andre Hahn, Daniel Caligiuri and Ruben Vargas. While Vargas is serving out his punishment for a red card, both Hahn and Caligiuri will be making the trip to Munich.

Top Betting Odds and Stats for Bayern Munich vs Augsburg

FAQs regarding Bayern Munich vs Augsburg Coverage and Accessibility 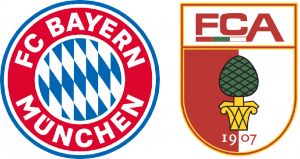 The match will take place at Allianz Arena.