Beijing Guoan host high-flying Changchun Yatai in the Chinese Super League on Thursday. Read our expert predictions and find the best odds for the clash below in our match preview.

Changchun Yatai can climb to the top of the Super League standings with a positive result at Beijing Guoan. Read our top three predictions for Thursday’s clash below.

Newly-promoted Changchun Yatai have taken the Super League by storm in 2021 and after a sensational haul of 16 points from the last 18 on offer the surprise packages have top spot in their sights. Chen Yang’s charges have won two of their last three matches on the road and with momentum to burn, they are out tip to claim another victory against a Beijing Guoan outfit that have dropped points in over half of their fixtures so far.

Alongside producing a string of impressive result, Changchun Yatai have also been providing some great entertainment in China. Six of their last seven Super League assignments have delivered over 2.5 goals and only league-leaders Shanghai Port have hit the net more often overall. We’re backing Changchun to add some sparkle to proceedings again when they visit Beijing and the over 2.5 goals line appeals as a result.

With veteran Brazilian hotshot Junior Negao in particularly devastating form, Changchun Yatai have looked extremely threatening in recent weeks and they have scored at least twice in each of their last six Super League fixtures. Beijing Guoan meanwhile, conceded three times to an ordinary Tianjin Tigers side last time out and in-form Changchun look a interesting prospect in the over 1.5 team goals market against that same shaky defence.

Beijing Guoan have underperformed since they decided to bring experienced coach Slaven Bilić to the club in January and their haul of just five wins from their first 12 matches of the 2021 campaign is a poor return for a team with lofty aspirations. The Imperial Guards’ 3-1 reverse to Tianjin Tigers last week was a new nadir for Bilić and a real confidence-shattering result ahead of another tough test on Thursday.

Changchun Yatai’s fairy tale start to the 2021 campaign continued last week when they thumped Wuhan 3-0 to move level on points with leaders Shanghai Port at the top of the Super League. The signing of 34-year-old Junior Negao from Japanese side Ulsan already looks like an inspired piece of business and the Brazilian has scored eight times in ten appearances for his new employers. 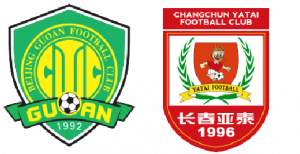 Thursday’s game will be played at the Kunshan Sports Center Stadium.