With three rounds left in the Chinese Super League, we already have a champion – Shandong Taishan. The team has a 10-point difference with 9 points available until the end. And now, they face Beijing Guoan, who already have nothing to play for as well but for a different reason.

Beijing Guoan had mathematical chances to reach the AFC Champions League but those disappeared when Shanghai Port won their last match. Now, Beijing have nothing to play for just like their opponents who already won the title in the league.

Beijing Guoan are one of the strongest home teams in the Super League. At least, they haven't lost a match at home yet and they have just 2 more to survive for the perfect home season. With the season pretty much over for both sides, we expect to see more untraditional football from these teams – at least, when it comes to Shandong Taishan, a less defensive style. The matches between these teams have always been extremely goal-packed and we do not expect something different from this fixture. Plus, Beijing have been quite impressive at home and have scored at least once in all but one game.

The full time result here is unpredictable – both teams have a chance and with nothing to play for but fun – it could go in either direction. Anyhow, Beijing have not lost at home this season while Shandong have lost just 1 away game in 9. Normally, we would bet on Shandong to win as their away performances have been outstanding but with them winning the title in the previous round, we expect the motivation to decrease. Beijing didn't have many chances in the previous match but still scored a goal. This time, we expect them to be better.

Most of the action in Shandong's games happens in the second halves of their games. This is something like a law at this point as there have been too few games where anything significant happened before the break. In each case, even if we see goals before half time, we will certainly see more after the break. Shandong are a team that scores in the final minutes – that is, in 80+ minutes. They also did it twice against Beijing Guoan in the previous match. In fact, all three goals were scored after the 70th minute. 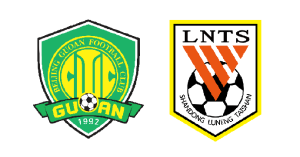 • Where is Beijing Guoan in the current standings?

Despite the incredible home performances, Beijing are the weakest away team in the Championship Group, which is why the team lost all chances for anything significant this season. They are currently 6th with 28 points while the AFC Champions League is already out of reach with Shanghai being 3rd with 38 points.

As the champions, it is more than expected that Shandong should have the strongest offense and it is true – 43 goals next to 12 conceded. On the other side, Beijing have only scored 23 in 19 games.

This game has been scheduled for 10:00 UTC on Wednesday, December 29.