The bottom two clubs in Group I face off at the Stadion Lokomotiv when Beijing Guoan and United City meet in the AFC Champions League. Read our predictions and find the latest odds for the game below in our expert match preview.

Beijing Guoan and United City have near-identical records in Group I after four rounds of matches. Here are our top three expert predictions for Thursday’s clash between the strugglers.

Beijing Guoan and United City have remained largely static at the foot of the Group I table while Kawasaki Frontale and Daegu have roared past them to the summit at their expense. The struggling clubs have taken just a single point and scored a solitary goal each from four rounds of games in the section and both were secured when the teams played out a 1-1 draw in June. With little to choose between them in terms of ability, another stalemate is worth backing this week.

Beijing Guoan and United City have been leaking plenty of goals in the opening exchanges of the AFC Champions League and the teams haven’t managed to secure a single clean sheet between them in their combined eight fixtures. Both of the Group I makeweights found the net when they squared off last month and a similar outcome is anticipated when they contest their second encounter this week.

The skirmish between Beijing Guoan and United City in June was every inch a battle between two very well-matched clubs and the eventual 1-1 scoreline at the final whistle was a fair reflection of the action that preceded it. With confidence low in both camps another share of the spoils and a single goal apiece should be expected this week.

Chinese side Beijing Guoan reached the quarter-finals of last season’s Champions League, though their chances of replicating that impressive run have already been dashed. Experienced Croatian coach Slaven Bilic has been at the helm since January, however, The Imperial Guards have performed badly under his watch and they have conceded a staggering 16 goals in just four Group I assignments so far.

United City from the Philippines are competing in the group stage of the Champions League for the first time this season and as such, expectations have been understandably low. Nevertheless, their 7-0 and 8-0 routs at the hands of Daegu and Kawasaki Frontale were embarrassingly one-sided and The Golden Boys hold the worst defensive record in the competition so far. 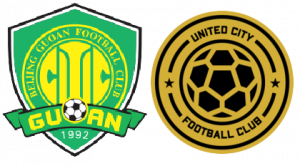 Thursday’s match will be played at the Stadion Lokomotiv in Toshkent.

Which club is favourite to win Thursday’s fixture?

The bookmakers have priced Beijing Guoan as slight favourites for the match though the teams looked well-matched in their 1-1 draw last month.