This preview looks into the Chinese Super League group game between Beijing Guoan and Wuhan. This match, which takes place at the Suzhou Olympic Sports Centre Stadium, promises to be a tight game even with eight points separating the two teams.

Beijing Guoan were able to pick up a 1-0 win over Dalian Pro to finally put some distance between them and the bottom two. Wuhan continued to pick up points as they forced a 2-2 draw out of Changchun Yatai at home.

Beijing Guoan boss Slaven Bilić was happy to see his team get a crucial win Dalian Pro which provides some breathing space to the bottom two places. After having hit the third spot in the 5th match day, Beijing Guoan have had a consistent slip in the table but they come into this game with a positive mainframe. Wuhan, though, have had some decent results by drawing against opposition like Shanghai Port and Shanghai Shenhua in recent weeks. They might be able to force another draw with a defensive approach.

Wuhan have had excellent results in recent weeks even if they are winless in 11 outings. The team has put in some solid defensive displays to not provide any hope for the opposition. Beijing Guoan have not been prolific in front of goal with only two goals in the last four games. This could end up being a game with less than 2.5 goals.

After failing to score in back-to-back games, Beijing Guoan have now found the back of the net in the games against Shanghai Port and Dalian Pro. Wuhan have only scored three away goals this season, but Wuhan have been able to resist some big teams along the way.

Beijing Guoan have shown some decent attacking form in the last few weeks. However, they have just been unable to find that clinical touch. Slaven Bilić will be hopeful that confidence returns to the team after their victory over Dalian Pro. There are no injury problems in the Beijing Guoan squad.

Wuhan remain not too far away from the bottom despite being unbeaten in the last four league encounters. This is due to a string of draws. Li Xiaopeng needs to see his team get more wins and he has a fully fit squad available for this game to go in search of the same.

Top Betting Odds and Stats for Beijing Guoan vs Wuhan

FAQs regarding Beijing Guoan vs Wuhan 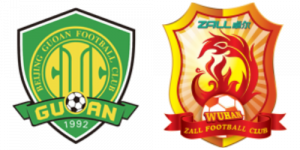 The Suzhou Olympic Sports Centre Stadium gets ready to host this game.

Beijing Guoan are seen as the favourites to win the game.