The bottom two sides in Group G meet on Wednesday when Johor Darul Ta’zim and Ratchaburi clash in the AFC Champions League. Read our predictions and find the latest odds for the game below in our detailed match preview.

Cut adrift in the bottom two positions in Group G, both Johor Darul Ta'zim and Ratchaburi will exit the Champions League once the final whistle blows on their encounter this week, though JDT are worth backing to end their campaign on a high. The Malaysian outfit squeezed a 1-0 victory out of their meeting with Ratchaburi last month and that triumph should arm them with the impetus they need to push for three points against the same opponents on Wednesday.

Somchai Maiwilai’s Ratchaburi have yet to break their duck in this season’s Champions League and they face leaving the competition without scoring a single goal this week. Johor Darul Ta'zim kept the talon-less Dragons at arm’s length when the teams last met in June and a repeat of that low-key 1-0 result looks possible in Wednesday’s return fixture. Three of JDT’s five group matches have produced under 2.5 goals and that same market is worth considering for their final test this week.

Ratchaburi started many of their group matches with dogged determination before their resolve was eventually ground down and as a result, three of their last four matches produced more goalscoring action in the second period than the first. The Thai club will attempt to make life difficult again for their opponents from the outset this week, though Johor Darul Ta'zim scored in the second half to beat Ratchaburi in June and our tip backs them to repeat the trick on Wednesday.

Little was expected of Malaysian side Johor Darul Ta'zim in this season’s Champions League and though the Southern Tigers failed to upset the odds in the race for a top two berth, they can still exit the competition with their pride intact. Their performances of promise included a pair of single-goal margin defeats to Group G leaders Nagoya Grampus and Mexican coach Benjamin Mora has solidified his reputation as a clever up-and-coming tactician.

Ratchaburi snapped their four-game losing streak with their 0-0 draw against Pohang Steelers last time out – a result that made waves across Thailand. Somchai Maiwilai’s men were never likely to cause many major shocks in Group G, though their failure to score a single goal so far remains a huge disappointment. The Dragons were deployed in a more defensive 5-3-2 formation in their stalemate with Pohang so expect to see the same set-up this week. 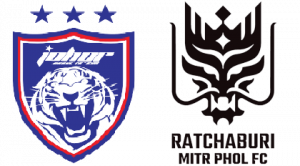 Wednesday’s match will be played at the Rajamangala National Stadium in Bangkok.