Benevento face Vicenza in the early fixture from the Serie B program on Sunday.

Benevento managed to create a solid gap between them and the teams behind, so they can come into this match without pressure and play their best football against a much weaker side.

Vicenza are one of the weakest teams and one of the lowest-scoring teams but they often manage to net an unexpected goal or two. Take a look at the first match between these two teams – it ended in a 2:3 win for Benevento. While Vicenza have been struggling in attack in recent games, Benevento have been unbelievable and we actually think that they will score three goals by themselves. They scored 8 goals in their last two fixtures in April and won 5:1 and 0:3 against much stronger opponents.

We are actually surprised to see such high odds for this fixture given the forms of both teams and their overall abilities. Vicenza won a single match in their last five fixtures and even that match was not theirs to take and was mostly luck and 10 players in defense. Benevento have been quite impressive lately and lost a single match in their last five. They won three times by scoring at least 3 goals and also had a 2:2 draw against one of the title contenders – Brescia. We think that they will not miss this opportunity.

Despite their poor performances and low number of goals scored, Vicenza take loads of corners almost every single game. In their last five games, they took an average of 6.60 corners and in their last five outings – 5.00 per game. On the other side, Benevento take a more average number – 4.20 corners per game, but against a weaker side like Vicenza, we expect a lot of action from the hosts.

Benevento have been a contender since the first round of this campaign and they made a solid squad in the summer window that did not require huge improvements in winter. Overall, the team lost some susprising matches that kept them from being a true contender for the championship but we have no doubts that they will at least participate in the promotion playoffs.

Vicenza have been sitting near the bottom since the start of the campaign and have five more chances to save themselves from direct relegation. At this point, their only chance is to finish in the two places that guarantee a play-in bout that grants a final chance to remain in Serie B.

Top Betting Odds and Stats for Benevento vs Vicenza

FAQs regarding Benevento vs Vicenza 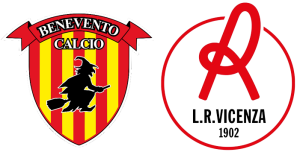 In which places are Benevento and Vicenza?

Benevento and Vicenza have always been in the opposite ends of the table. Right now, Benevento are 6th with 57 points while Vicenza have 25 points at 18th place.