Wednesday’s Indian Super League comes from Bangalore as Bengaluru prepare to host Chennaiyin. It’s a contest that sees third take on eighth place with just four points between the sides. The league is still tightly packed, a win for third place Chennaiyin could see them climb all the way into top spot. A win for eighth place Bengaluru would see them potentially springboard into fifth spot. It should be a great game between two teams in decent form.

Perhaps surprisingly it’s Bengaluru who are the bookies favourites to claim all three points here, they do come into this match in slightly better form, but I do think there is some value to be had with backing the away side here. Chennaiyin are 6/5 to start with a +1 goal lead and we think that is a tremendous bit of value. Chennaiyin have the second best away form in the league and have picked up ten points from a possible eighteen on the road. At home Bengaluru have the second worst home form having just taken seven points from a possible eighteen. We think Chennaiyin at the odds are the right way to play here.

In another hard market to call, we will side with both teams not to score here. Only once in the last five meetings between the teams have both teams scored, which indicates how competitive these games can be. In their last five league matches respectively both Bengaluru and Chennaiyin have seen both teams score in three of the last five matches  and although both teams have scored more often than not, we think that this one could be a tight affair and these teams could cancel each other out.

The Best Match Odds for Bengaluru vs Chennaiyin 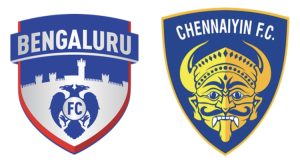 Cleiton Silva has had a great season for Bengaluru. The Brazilian forward has scored five times and provided three assists so far this season. Look for Silva to be the difference maker here.

What is the kick-off time for Bengaluru vs Chennaiyin?