Two of the top teams in the Indian ISL meet each other in a crucial game on Friday – Bengaluru take on Hyderabad.

Hyderabad lost their most recent game and this now gives a chance to Bengaluru to reach them at the top. Of course, if the hosts manage to snatch the three points.

Games between strong teams can often end with few goals or even a 0:0 but we expect to see at least one goal from both sides. These are the two highest-scoring teams in the league and at the same time, their defenses allow a lot of goals. The Indian ISL league is an incredible levelled league and a lot of teams have the same abilities. Bengaluru have the second-most goals in home games to date – 29 in just 8 games, so we think that an over 2.5 here is also quite possible. The hosts are the team at the best form currently but they also concede a lot of goals.

Bengaluru have been placed as massive favorites to win this game but we expect a totally different outcome. It is true that the hosts are in the best form in the league but that doesn't mean much when most of their wins came in games on the road. At home, the team has had 4 draws in 8 games and some of those were against much weaker opponents. Hyderabad will be motivated to retain the top position in the league and we expect to see a much better performance from them than in the previous match. It is also a fact that more than half of the league is almost equal in strength, so we do not see how the hosts are such massive favorites.

There aren't as many markets for the Indian ISL, so we are going for a more untraditional approach here with a goalscorer. Ogbeche Bartholomew has been outstanding this season – it really is unbelievable. He played in 14 league games to date and scored 14 goals. We think that if there is a potential goalscorer for this game, there is only one name that should come to mind – Ogbeche Bartholomew. The odds are not yet available but since this is the Indial league, we know that they will be good enough for a single bet.

Top Betting Odds and Stats for Bengaluru vs Hyderabad

FAQs regarding Bengaluru vs Hyderabad 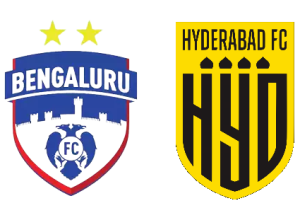 • In which places are Bengaluru and Hyderabad?

More than half of the Indian ISL is position within 7 points of each other. Hyderabad are the current leaders with 26 points but Bengaluru are almost next to them with 23 points. A win here would put them tied at the top but Hyderabad will retain their position as leaders due to the better goal difference?

This game will be played at Bengaluru's home ground – the Sree Kanteerava Stadium, which has a capacity for 25,810 spectators.