Both Utrecht and Feyenoord come into this tie with inconsistent form; and will hope to use a win to gain momentum as the season draws to a close.

Berghuis has 3 goals in his last 5 away games in all competitions; with the Dutchman ranking in the top 5 in the goal-scorers and assists charts in the league. As captain and primary penalty taker for Feyenoord; Berghuis is a talismanic figure who often leads by example. He has hit double figures in the league for the past 4 seasons, including ‘20/21.

Utrecht have scored at least once in 6 of their last 7 home games; whilst Feyenoord have done similar in 4 of their last 5 away games. De Stadionclub have scored 2 goals per game in the league this season, Utreg have 1.63 goals per game this season. Both sides have shown their capacity to find the net regularly through the course of the season, meaning the tie should have goals in it.

Utrecht are missing crucial players for this tie, with centre-back Tommy St. Jago out with Covid-19 and central midfielder Bert Ramselaar on the sidelines with a head injury. Both have clocked up over 1500 minutes each in the Eredivisie. Justin Hoogma, the centre-back on loan from Hoffenheim, is back in training after a 4-month injury layoff. He had clocked up close to 1500 minutes himself before the injury and will be a big boost to Utreg.

Feyenoord will be without starting central midfielder Orkun Kökcü and right-back Bart Nieuwkoop; as well as striker Nicolai Jørgensen. Kökcü has Covid-19 whilst Nieuwkoop and Jørgensen are out with hamstring and ankle injuries. Manager Dick Advocaat was previously manager of FC Utrecht before being appointed boss of De Stadionclub.

Best Odds and Stats on FC Utrecht vs Feyenoord 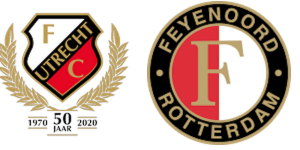 The Stadion Galgenwaard hosts this game, the home stadium of FC Utrecht. It can accommodate 23,750 spectators.

Which team is the favorite to win?

FC Utrecht are surprisingly favorites for this game with odds of 5/4 compared to Feyenoord’s 19/10.