This preview aims to provide betting insights into relegation-threatened Hertha Berlin's home fixture against Borussia Monchengladbach at the Olympiastadion.

The Old Lady gave a good account of their abilities in the Berlin derby and should have enough in the tank to take on Borussia. Marco Rose's men have lost three of their last five away trips and only ended their winless run at the expense of the woeful Schalke 04. Hertha will pose more of a threat and will look to build on their two successive home wins against Bayer Leverkusen and FC Augsburg.

Hertha have only scored six goals in their last five home trips but it increases to ten goals overall. On the other end, Borussia have managed a comparable six in their recent five away trips. With both sides exhibiting a tendency to score freely but concede with relative ease, the Over 2.5 should be realized.

Both the Old Lady and the Colts have a porous backline that concedes with relative ease. However, they have failed to score in two of their last five games. On the night, they should balance each other's weaknesses out, which can provide plenty of goalmouth action. It promises to be a exciting affair as both sides have plenty at stake with the season entering its final stretch.

Despite their relation battles, Pal Dardai's men secured an impressive away draw in the Berlin derby. The point accumulated allowed the Old Lady to add a little distance between them and FC Cologne in the relegation playoff slot. However, to ensure their Bundesliga stay, they will need to secure the points on offer. Matheus Cunha will their knight in shining armor for the elusive goals that have in their home trips. There will also be pressure on Polish forward Krzysztof Piatek to get on the scoreboard and end his three-match barren run.

Marco Rose's men have managed successive wins against Schalke 04 and SC Freiburg after seven successive defeats. Their Champions League ambitions are out of the picture but Europa League qualification can be salvaged in their remaining seven fixtures. They need to take points off the relegation-threatened Hertha to have a chance in the final stretch of the season. Captain Lars Stindl should provide the goal the goals, while the creativity duty will again lie with Jonas Hofmann.

Top Betting Odds and Stats for Hertha vs Monchengladbach

FAQs regarding Hertha vs Monchengladbach Coverage and Accessibility 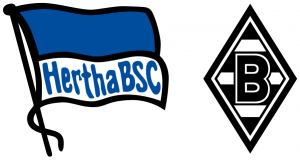 The match will take place at the Olympiastadion.