Manchester City failed to get over the challenge of Manchester City last weekend, bringing an end to their 21-match winning streak in all competitions. They have since come back strongly and are firing on all cylinders. Southampton and Fulham have suffered their wrath and this streak is set to continue as Pep Guardiola's men target the UEFA Champions League. Marco Rose's Foals suffered at the hands of lowly Augsburg and look bereft of ideas. It points towards a victory for the hosts and the only question is the margin of victory.

In the absence of Sergio Aguero, Gabriel Jesus stuttered to prove himself at the Etihad Stadium. Ever since the prolific Argentine has returned to the first-team fold, so have the goals of the Brazilian. Jesus has three goals in his last three outings for the Citizens and should get on the scoreboard against the clueless Bundesliga outfit.

Three out of Borussia Monchengladbach's last five games have seen one side fail to get on the scoreboard. To make matters worse, Borussia have been the side on the wrong end of the equation. At the same time, City are on the brink of European record for clean sheets. They have gone 616 minutes without conceding in Europe and can make Juventus' record of 690 minutes their own.

Pep Guardiola's future was under question at the Etihad Stadium as the Citizens were second-best by a long margin to Liverpool. They have bounced back this season despite battling injuries and command a 14-point lead at the top of the Premier League table. The Champions League continues to evade them but they are in pole position for a fourth consecutive appearance in the UEFA Champions League (UCL) quarter-final. They have scored eight goals in their last two games and will be looking to add to their tally.

On Tuesday night, Guardiola will come across Marco Rose, a manager still learning his trade when he reigned supreme in Germany with Bayern Munich. Rose has impressed in the Bundesliga with Borussia Monchengladbach and earned a promotion with a job with Borussia Dortmund. However, this has coincided with poor run of form at Borussia Park. They have managed seven defeats and a draw from their last eight games and need to turn around their fortunes. While Guardiola has his preferred first-team players at his disposal, Rose is without Christoph Kramer, Ramy Bensebaini, and Famana Quizera.

Top Betting Odds and Stats for Man City vs Monchengladbach

FAQs regarding Man City vs Monchengladbach Coverage and Accessibility 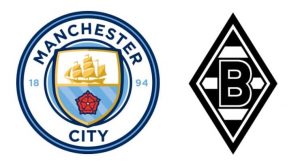 The match will take place at the Etihad Stadium

What was the result of the first leg?

Pep Guardiola's Manchester City picked up a 0-2 away win in the first leg in Germany and welcome their rivals in England to finish the job at home.