What is Cash Out? Our top Cash-out betting sites 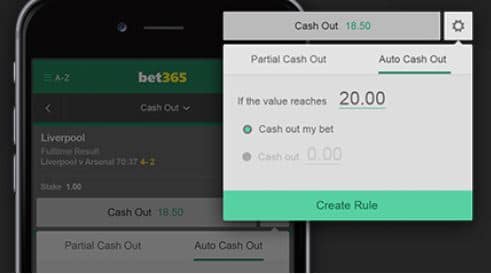 Cash-out is a common feature among Sportsbooks, and customers use it all the time. The feature allows you to settle your wager before the match is finished. If the feature is available for the game you are betting on, you would be able to see a button or a link to it somewhere on your bet slip. The value you would be able to cash out is different at any moment, and it depends on:

The cash-out value is calculated by dividing the prospective winnings by the price of the wager. All values used in the formula are taken at the time of computing, so you would see how much you would receive if you cashed out the wager. Some bookmakers immediately transfer your cashed-out winnings to previously registered prepaid cards, and you won't have to wait days before you can access them.

Let's say you place a wager on the West Ham vs. Liverpool match. You bet £100 that the favorite of the game would win – Liverpool to beat West Ham. At the half time, The Reds are in the lead with 1-0. For now, your wager is looking good. At the time of placing your bet, the favorite team was priced at 2/1. If things don't turn around in the second half of the match, you should win £300. Anything could happen in the second half of the game, and you aren't sure how things are going to go. Cashing-out is a great way to ensure that you would still get something out of the wager even if Liverpool end up losing the game in the second half. The bookmaker you are betting with will display a cash-out value when you want to cash-out of £270. You wouldn't receive the maximum payout from using the cash-out feature, but you would still get more than half what you would typically win back.

If the same match in the example takes a different path, let's say West Ham takes the lead with 2-0. Cash-out is also very valuable then because you would get something back even if the team you backed ends up losing. The bookie might offer you a cash-out value if £40, for example, which is better than nothing. Of course, there is the possibility that Liverpool makes a comeback and wins the match after all, but that's the fun in sports betting, you never know what would happen in the end. It's your choice whether you would want to cash out and take some of your stakes back at least or keep going and wait until the end of the match with the hopes that The Reds turn the game around.

Partial Cash-out is a side feature of the main Cash-out one. You can cash-out only a specific part (%) of your wager. The cashed-out amount would be calculated at the current value, but the rest of the bet would remain until the match is finished, and the wager is settled.

Auto Cash-out is another side feature that some bookmakers offer their customers. You would have to set a value threshold when you arrange the settings of the feature. Whenever the value of any wager, where Cash-out is available, goes beyond that threshold value, the Auto Cash-out feature triggers automatically. You don't even need to be logged in to your account for that.

What are the Advantages of Cash-Out?

There are two main advantages to cashing-out a wager. The first one is mitigating your losses. Let's take the examples in one of the previous paragraphs, for instance. You would be reducing your future losses by cashing out if West Ham is in the lead in the first half of the match. You could wait until the end, but more than likely, Liverpool would lose this match rather than score three goals in the remaining half of the game. Another advantage is that with the help of this cool feature, you can protect your current winnings. As shown in the first example where Liverpool leads with 1-0, you would cash-out and get more than you wagered on, even if it's not the maximum payout you would receive if you waited until the end of the game. Like we said in sport, there is always the possibility that the underdog may win even if the favorite is in the lead.

Cash-Out on a Mobile Betting Platform

Most popular bookmakers allow their customers to use the cash-out feature from their mobile devices, whether it's the bookmaker mobile app or the mobile site. All the bookmakers we've recommended in the rest of this article have both mobile websites and applications you can access. You should have no trouble accessing the mobile platform feature, especially if it's the mobile app.

Here is our list of the top Cash-out bookmakers in the sports wagering industry:

Cash-out became popular after Betfair introduced the feature back in 2013. Since then, it has become one of the most-used Sportsbook features ever. It's easy to understand, and you can use it on multiple bets and betting markets, across an array of sports. Since most of the bookmakers offer the feature, you wouldn't have any trouble, and if you already bet with a particular bookmaker, they might offer the feature on their platform. Accessing the feature is as easy as pie on both the online and mobile platforms, and there are enough advantages of using the feature.