Cosenza will be hosting Spal on home soil and it promises to be an entertaining tussle considering that they are both among the bottom five teams of the table. Cosenza are only just a point ahead which gives insight to the fact that they are both in similar form currently. There are a lot of possibilities for this match. Read our expert predictions and find the latest odds for the fixture below in our match preview

Both teams are relatively underperforming currently, so we expect to see a spectacle between two poor teams.

For a match between two underperforming team's like this, there is very little to be expected. We foresee both teams playing a very close-knit game that will make it hard for one team to end up victorious. It is not surprising that the last two times they have paired against each other, between last year and this year, they finished draw on both occasions. This goes to prove our earlier point. There is a high tendency for this match also turning that way too, hence making draw a viable market to wager for this game.

While there is little possibility of both teams banging in a lot of goals looking at past records, they are likely to score at least two goals in this match. Interestingly, over 1.5 has been consistent for the last two times that both teams have been paired against each other too. Having that in mind, backing this match over 1.5 should likely happen.

Top Betting Odds and Stats for Cosenza vs Spal

For a game like this, there are no favourites. Both teams are currently struggling, hence occupying the bottom five spots of the table. There is no telling who would win. However, one thing that is highly likely is that both teams will score.

FAQs ahead of Cosenza vs Spal 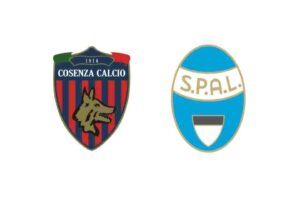 We recommend using NetBet for Cosenza vs Spal

There are no clear favourites for this game. Either side could win this one