The second leg of the Serie B play-out between Cosenza and Vicenza is scheduled for Friday and we expect to see an exciting game, especially after Vicenza won the first leg by one goal. So, here's our detailed preview of this match.

Our free Cosenza vs Vicenza betting tips and predictions

If you are struggling to find the best bet for Cosenza vs Vicenza, check our top betting picks for this match:

Cosenza and Vicenza to Draw

The first leg between these two teams was a very close one, but Vicenza ultimately emerged victorious thanks to a late goal – the winning goal came in the 90th minute of the game.

With that in mind, we expect to see another exciting and close game and we can see this match ending in a draw. After all, Cosenza and Vicenza drew in three of their last five h2h duels, so that is certainly a realistic outcome.

Cosenza and Vicenza to Draw at Half Time

Since we expect this game to end without a winner, we can also see Cosenza and Vicenza being tied at half time. After all, that is often the case with matches ending in a draw.

In addition to this, Cosenza and Vicenza drew at half time in three of their last five head-to-head meetings. So, we wouldn't be surprised if that happened again on Friday, especially given the significance of the game.

Four of the previous five head-to-head duels between Cosenza and Vicenza have gone under 2.5 total goals and we can see that being the case again in their upcoming match.

Cosenza vs Vicenza preview: Which Team Will Stay In Serie B After This Game?

After they finished the season in the 16th place and avoided relegation by just one point, Cosenza is in the play outs of Serie B, trying to stay in the league. However, the team lost the first leg against Vicenza 1-0 and now they need to find a way to beat Vicenza or they will have to move to the third rank of Italian football.

Three wins in the last three games of Serie B helped Vicenza avoid direct relegation and that was only by one goal since they had the same number of points as Alessandria. That being said, the last game of regular season Vicenza played against exactly Alessandria and beat them 1-0 away from home. But the job is not yet done – Vicenza now has to beat Cosenza on aggregate to stay in the league and they are on good path to do this since they won the first leg 1-0 thanks to a goal in the 90th minute.

The best odds, stats, and more for Cosenza vs Vicenza

If you are looking for the top odds the Cosenza vs Vicenza duel, check our selection of odds from the top UK betting websites: 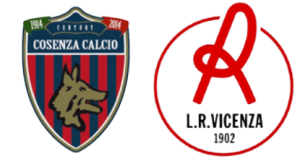