In this betting preview, we look at the Bundesliga meeting Eintracht Frankfurt and FC Augsburg at the Deutsche Bank Park.

Over the last five home games, Eintracht are the form team in the Bundesliga, outpacing Bayern Munich in the process. The Eagles are fancied against Augsburg, who enter the fixture on a three-match losing run. With Andre Silva looking to maintain his Bundesliga goalscoring form, looking beyond them is a folly.

Adi Hutter's men have averaged 3.5 goals per game at home for the duration of 2020/21 German top-flight campaign. Moreover, the Over 2.5 has been observed in their last four successive games. Whle Augsburg are profligate, especially on the road. Given their relative poor form and inability to keep a clean sheet, it looks unlikely that a contained result will be witnessed.

Borussia Monchegladbach ended the Eagles run of scoring in 23 successive games. Adi Hutter's men have the firepower to get back on the road at the first time of asking. The same cannot be said of the Fuggerstädters, who have failed to hit the back of the net in their last two away games. However, they will get a chance as Hutter rethinks his defensive options after their 4-0 defeat.

Adi Hutter has transformed the Eagles into genuine top-four contenders. They were on a 23-match scoring run which sadly ended against Borussia Monchengladbach. Frankfurt will have to rebuild their run but Hutter will not be there to see it through as he joins Monchengladbach at the end of the current campaign. It is a necessity with five matches remaining until the end of the campaign, and Borussia Dortmund breathing down their necks for the final UEFA Champions Leaue qualifying slots.

Come first whistle next season, there might be a change in the dugout for Augsburg if Heiko Herrlich cannot improve on their 15th place finish last campaign. Given their recent form, Augsburg's hopes of finishing in the top-half are improbable, putting pressure on Herrlich to deliver. They need a strong finish in the end of the campaign and require their forwards come out of hibernation. With their forwards failing to score regularly, the onus is on Andre Hahn. The German midfielder has scored five goals in his last eight outings, with all his strikes contributing to wins.

Top Betting Odds and Stats for Frankfurt vs Augsburg

FAQs regarding Frankfurt vs Augsburg Coverage and Accessibility 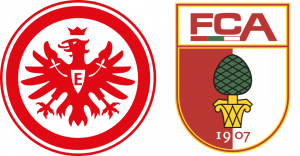 The match will take place at Deutsche Bank Park.

BT Sport and Sky Bundesliga are the places to watch the live broadcast on television. One can also watch the game from the numerous live streams available from bookmakers.