Halifax wants to achieve their fourth winning in a row and keep unbeaten for the sixth occasion. After some bad results, Bromley needs to get back to winning ways if they want to return to the highest of the table.

Halifax is passing through an excellent moment, they have scored in every of their last 5 games. Now, it is the turn to face a team that does not win away since January. Securing these three points at home means reaching second place on the National League table. So, Halifax is motivated and we predict that they will put their best effort to win this encounter.

The last meetings between both teams have been closed and have finished with a low score. Halifax have won most of their games just scoring one or two goals, but they haven't conceded many goals, especially at home. One of Bromley's favorite things is to score away but this has not happened lately, so we expect Halifax to score one or a maximum of two goals.

Halifax is the second team that conceded fewer goals, in the National League, after Boreham. So, we think that only one team could score, and that is not Bromley, they have had a hard time winning even against teams in the bottom half of the table. Because of this, having a BTTS in this match would be difficult to observe.

The current success and position of Halifax are because of their consecutive victories in the National League. Their coach already found a balanced team that improves game after game, consolidating in defense and providing what is needed in attack. They have become a tough team to defeat.

The bad results have moved Bromley from the top to the mid of the National League, so they could not allow spreading three more points. That would mean to be out of the battle for the first place in this last part of the league. Beating this direct rival is the perfect way to change their actual situation.

Halifax vs Bromley: The latest Stats and Figures

FAQs regarding Halifax vs Bromley Coverage and Accessibility 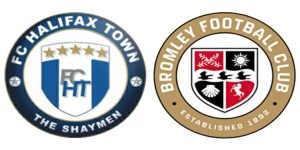 When is the match scheduled? The match will take place on 13 March 2022 at 19:45 GMT.
Where is the game being televised? BT Sport.
Who is the bookmakers' favourite to win? Halifax.