In this betting preview, we look at the top of the table Bundesliga fixture between Borussia Monchengladbach and Eintracht Frankfurt at the Borussia Park.

The Colts have shown maturity in recent games, claiming two wins and a draw. Both Marcus Thuram and Lars Stindl have scored two goals apiece in this run, and will be gunning to add to their tally. They will come up against Andre Silva and Luka Jovic, with proven pedigree in the competition. Moreover, both sides have seen the Over 2.5 come true in their last three successive games.

Gladbach's return to form has coincided with them outscoring their rivals as their defence continues to ship in goals. At the other end of the pitch will be the Eagles, who have seen both sides hit the back of the net in their last seven successive games. To top it off, they have scored in each of their last 12 away trips, with only Bayern Munich taming their strikers. With attackers from both sides in their stride, match scorers will be troubled on either end.

After a run of nine matches without a win, Marco Rose's side are on a three-match unbeaten run including two wins. The attacking fluidity is back and the run would have been longer had Yann Sommer not received his marching orders in the 13th minute against Hertha Berlin on the road. The chief reason for the Colts' renaissance has been their forwards finding their goalscoring shoes. Captain Lars Stindl's presence in the starting eleven has been the differentiating factor for both his scoring prowess and leadership skills.

The Eagles finished ninth in the Bundesliga last campaign, troubled by the high profile departures of Luka Jovic and co. at the end of the 2018/19 campaign. Adi Hutter has changed the mood at the Deutsche Bank Park and Frankfurt are back challenging for Champions League qualification spots. Their bid has been propelled by the extreme goal scoring form of Andre Silva, who has plundered 23 goals so far this season. The Portuguese has been ably supported by Filip Kostic and Daichi Kamada, who have double-digit assists against their names.

Top Betting Odds and Stats for Monchengladbach vs Frankfurt

FAQs regarding Monchengladbach vs Frankfurt Coverage and Accessibility 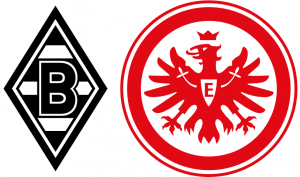 Despite being on the road, Eintracht Frankfurt is favourites for this Bundesliga fixture at odds of 8/5.