Suwon have hardly been flying lately. Can they brighten things up with a win over Gimcheon Sangmu?

Suwon FC have been one of the worst teams in the K League this season; they are second-last, with just two wins in eight league games so far. It's fair to point out that Suwon lost five of those eight games, including their last two games. Gimcheon Sangmu, on the other hand, have been relatively better than Suwon; they are coming off a win, and have no losses in their last three games. Additionally, Gimcheon Sangmu won the last two meetings between these teams; they have no losses in their last three encounters. All things considered, we're predicting a win for the visitors.

Gimcheon Sangmu have been very good defensively, only the top two teams have allowed fewer goals than them this season; as a result, most of Gimcheon Sangmu's games have been low-scoring games. Kim Tae-wan's men have played eight league games so far, and six of them went under 2.5. Similarly, Suwon have had their fair share of low-scoring games; as five of their eight league games saw less than three goals scored. It's also worth mentioning that five of the last seven meetings between these two went below the 2.5 goal mark; and on that note, our final prediction for this game is under 2.5 total goals.

Top Betting Odds and Stats for Suwon vs Gimcheon Sangmu

Things have not gone too well for Suwon FC this season; they are coming off consecutive losses, and they've lost five of the eight games they've played so far. Suwon FC will hope to improve their poor form with a win as Gimcheon Sangmu come visiting; it'll be interesting to see how they'll fare with Seung-jun Kim leading the attack.

Gimcheon Sangmu are coming off an impressive 3:0 win at Seongnam; they are unbeaten in their last three games, and have lost just once in their last six games. Gimcheon Sangmu will fancy their chances of getting all three points as they take on a struggling Suwon team; it's worth keeping an eye out for K League top scorer Gue-sung Cho.

FAQs regarding Suwon vs Gimcheon Sangmu 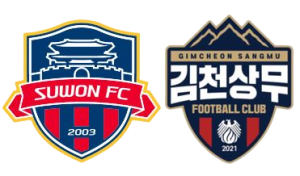 Who is the Suwon manager?