The Swindon vs Arsenal U21 duel in the first round of the EFL Trophy should be an interesting one, so check our preview of this game and some of our top betting predictions.

Our free betting tips for Swindon vs Arsenal U21

If you need some help to find the right bet for Swindon vs Arsenal U21, check some of our favourite betting predictions for this game:

Swindon and Arsenal U21 to Draw

This is a very interesting duel since Arsenal's reserves obviously have a lot of quality for this level of competition, but Swindon is doing very well so far in League Two. With that in mind, we think that this game could end in a draw, depending on the team that Arsenal U21 fields in this game.

With an average of just 1.83 goals per game, Swindon is among the worst teams in League Two in this respect. However, our prediction for this match is over 2.5 total goals because Arsenal U21 team is known for scoring and conceding many goals. For example, three of the last five matches played by Arsenal U21 have gone over2.5 total goals.

Just like our previous prediction, this one is also based on the performances by the guests rather than the home team since both teams have scored in just two of the last five matches played by Swindon in all competitions. However, four of the previous five games played by Arsenal U21 have ended with both teams scoring, so this sounds like a good bet to us.

Swindon vs Arsenal U21 preview: Can Swindon keep the good form going?

While the home team is doing well in their league, the guests don't play competitive matches that often. With that in mind, let's take a closer look at both teams right now:

The new season has started well for Swindon, especially in League Two. The teams has three wins, two draws, and one loss after the first six matches in the league, which is enough to put them in the fourth place. On the other hand, Swindon was eliminated in the first round of the EFL Cup by Cambridge United, so we'll see how they will fare in another competition beside League Two.

The youth team of one of the best English clubs has had some success in the EFL Trophy in recent years, but that usually means getting out of the first round. Last year, Arsenal U21 have reached the second round where they were eliminated by Wimbledon in a convincing 3-0 loss. The team will probably hope for a better result this year, starting with a win over Swindon in the first game of the group.

The best odds and stats for Swindon vs Arsenal U21

If you are looking for the best odds for the Swindon vs Arsenal U21 duel, check our selection of odds from the top UK bookmakers:

Frequent questions for Swindon vs Arsenal U21 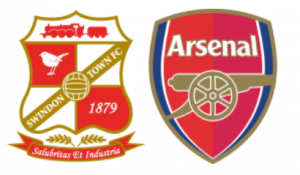